First, the key comparisons in Wood Mackenzie’s study in one chart: Across the board, pro-development energy policies – increased access to energy reserves, regulatory and permitting policies that accelerate energy production and energy exports that would stimulate more domestic production – produce positive results for America. Meanwhile, the study found that a regulatory-constrained approach would produce negative outcomes.

In terms of economic growth, Wood Mackenzie says a pro-development approach would result in an increase of $443 billion in annual GDP over baseline growth by 2035 – tracked with the light-blue line in the chart below: 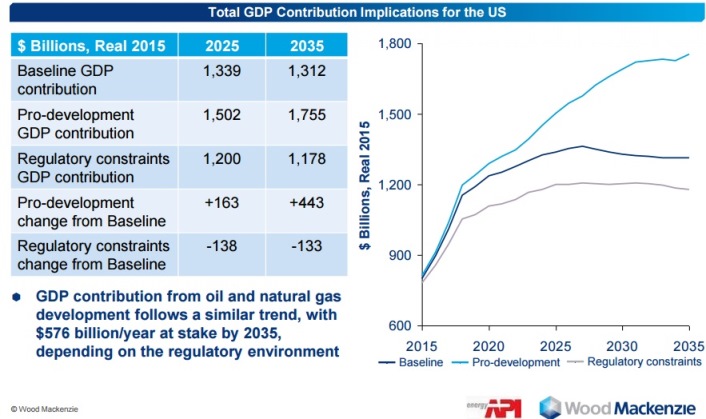 The chart also shows that a regulatory-constrained approach would result in a decrease of $133 billion in annual GDP below the baseline by 2035 (gray line). The difference between the lines: $576 billion in GDP by 2035.

These charts show the GDP impacts distributed over the oil and natural gas industry’s upstream (light blue), midstream (yellow) and refining (red) sectors compared to projected baseline growth (line).  On the left, growth over the baseline out to 2035 with pro-development energy policies. On the right, below-baseline performance with regulatory-constrained policies.

The pictures here are clear: Pro-development energy policies would be good for the economy and good for government in terms of generating tax income – revenues to help fund the nation’s critical needs. America needs the economic growing power of safe, responsible oil and natural gas development that would be fostered with a pro-development policy approach. This would generate more revenues for government to fund our broad priorities.

Conversely, we can’t afford the negative effects of regulatory-constrained energy. That self-limiting path would needlessly squander economic growth and tax revenues for government, impacting virtually every person in this country.

Those are the contrasting choices before U.S. voters as the 2016 election approaches. We need to elect leaders who understand these choices and will pursue policies and actions that support responsible, beneficial energy development.