Our series highlighting the economic and jobs impact of energy in each of the 50 states continues today with Massachusetts. We started our focus on the state level with Virginia on June 29 and information covered in this series can be found online here, arranged on an interactive map of the United States. State-specific information across the country will be populated on this map as the series continues.

As we can see with Massachusetts, the energy impacts of the states individually combine to form energy’s national economic and jobs picture: 9.8 million jobs supported and $1.2 trillion in value added. 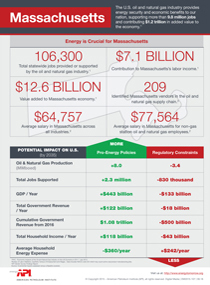 Click on the thumbnail to bring up a two-page snapshot of energy’s benefits to Massachusetts.

The top-line numbers: 106,300 jobs supported statewide, according to PwC; $12.6 billion added to the state economy; $7.1 billion contributed to the state’s labor income. All are significant drivers for the state’s economy.

Page 2 of the document highlights the potential benefits that updating regional energy infrastructure could bring to Massachusetts. Investments in new oil and natural gas infrastructure to meet our new energy reality could generate significant capital investments and could ripple through the U.S. economy, create jobs, increase GDP and labor income, and boosting tax revenue to federal, state, and local governments.

Modernizing national energy infrastructure could contribute an estimated $1.14 trillion in capital investments. In the Northeast, possible investments are estimated at $7.5 billion, with more than 140, 600 net jobs created in the region, according to a study by IHS Global Inc.

Energy is critically important to Massachusetts, serving as a key engine for the state economy – expanding job opportunities and offering the hope of prosperity to individual Massachusettsans and their families.

The future benefits of energy for Massachusetts – and the rest of the country – largely depend on national decisions on the country’s energy path. A new Wood Mackenzie study contrasts the benefits that a set of pro-development policies could have on energy supplies, jobs, the economy and American households with the likely negative effects on energy of regulatory constrained policies. The key comparisons are found on the first page of the linked document.