The Green Case for Fracking

When a former Greenpeace executive director comes out in support of hydraulic fracturing, your first impulse probably is to check outside to see if pigs indeed have taken flight. The second and totally serious response is to understand and embrace the argument for fracking that's being made by one leading environmentalist.

That environmentalist is Stephen Tindale, who led Greenpeace U.K. from 2000 to 2005. Tindale said recently that hydraulic fracturing is key to advancing climate goals while praising the British government’s decision to approve a shale natural gas project:

“[T]oday Britain faces its biggest environmental challenge ever — tackling global warming while still keeping the lights on. And as a lifelong champion of the Green cause, I’m convinced that fracking is not the problem but a central part of the answer. … And if activist groups including Greenpeace really want to help the environment, they should stop protesting about projects like this and let them be built as quickly as possible.”

Tindale is right. In this country fracking is the chief driver of U.S. climate progress, producing record volumes of cleaner-burning natural gas. The increased use of gas – it has become the No. 1 fuel for U.S. electricity generation – is allowing the United States to lead the world in reducing energy-related CO2 emissions. Last year they declined to their lowest level since 1993. Here’s a chart we posted last week: 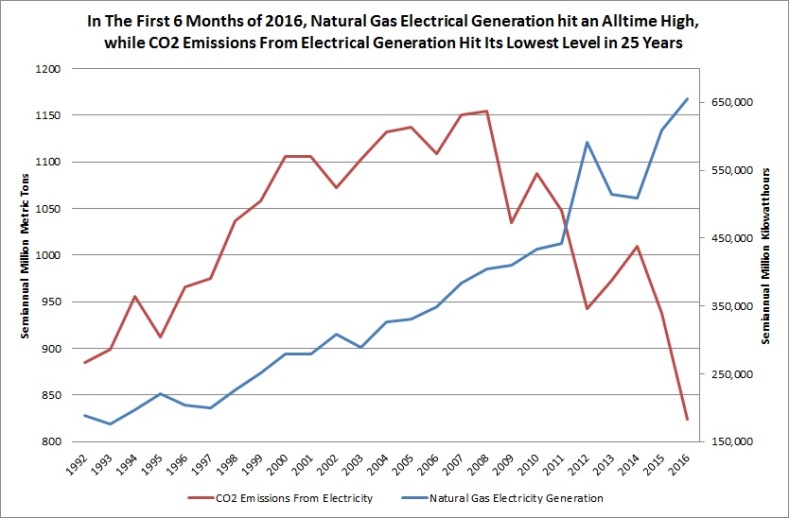 The plummeting red line is U.S. CO2 emissions from electricity generation. The blue line is the increased use of natural gas to generate electricity used by American homes, businesses and manufacturing. Note the relationship: Increased natural gas use in the power sector = significant reductions in carbon emissions.

That the two lines are basically running away from each other should be noticed by climate activists in this country and all over the world. Instead of working, as some are, to block safe natural gas production and/or development of needed pipeline infrastructure, activists should support both. That’s the point Tindale makes in Britain: If you care about real climate progress, embrace safe and responsible fracking and natural gas.

Earlier this month President Obama similarly lauded the role of natural gas in reducing carbon emissions at an event on the South Lawn of the White House:

“[T]he fact that we’re transitioning from coal to natural gas means less greenhouse gases. … We’ve got to live in the real world. I say all that not because I don’t recognize the urgency of the (climate) problem. It is because we’re going to have to straddle between the world as it is and the world as we want it to be ...”

Using more natural gas is a rational path in the pursuit of climate objectives, a market-based approach that's yielding tangible carbon reductions without sacrificing economic growth. Part of that growth is the recent renaissance in U.S. manufacturing – with affordable natural gas as a fuel and a feedstock boosting the sector’s competitiveness. U.S. consumers also are benefiting from surging natural gas production, paying less for electricity because the affordability of gas is helping lower generating costs.

Renewable energy has a role to play in the U.S. energy mix and in the climate conversation, yet as we noted in this post, natural gas is renewables’ essential friend, the baseload fuel for when the sun doesn’t shine and the wind doesn’t blow. Interior Secretary Sally Jewell earlier this year:

“I think that to keep it in the ground is naïve, to say we could shift to 100 percent renewables is naïve. We really have to have a blend over time, and a transition over time, that recognizes the real complexity of what we're dealing with.”

For all of these reasons – natural gas. It’s good to see someone with Mr. Tindale’s environmental cred making the Green case for fracking and natural gas. Now, one more peek out the window for those flying pigs.