Giving Thanks for U.S. Energy

Historically and culturally, Thanksgiving is this country’s calendar cue to be thankful, to be grateful, from household to household. As President Lincoln said in his 1863 proclamation creating the holiday, it’s a day to recognize the “blessings of fruitful fields and healthful skies.”

This year is no different. Americans can give thanks for a number of things. The American Farm Bureau Federation tells us that the average cost of a Turkey Day feast for 10 this year is $49.87, a 24-cent decrease from last year’s average. (Alas, there’s no reported decrease in the remorse a number of us will feel from feasting a bit too much.) This being an energy blog, some feast factoids with an energy twist: 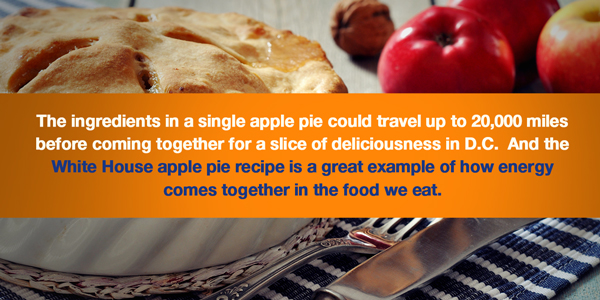 Certainly, all of us can be thankful for our American energy renaissance that is creating energy abundance, fostering economic growth and consumer savings, making our country more secure and helping improve the environment by reducing emissions of carbon and other pollutants.

More to the Thanksgiving point, the U.S. Energy Information Administration (EIA) reports that U.S. average gasoline prices heading into the holiday weekend are the second-lowest in eight years, averaging $2.16 per gallon of regular-grade fuel.

This is splendid news given the fact Thanksgiving is one of the heaviest times of the year for going over the river and through the wood, to the homes of loved ones and friends – by fuel-propelled vehicles if not horse-drawn sleighs. EIA:

Gasoline prices continue to be closely linked to crude oil prices. Total petroleum and other liquids production continues to outpace consumption globally, resulting in growing inventories and downward pressure on prices. The spot price for Brent, a key global crude oil benchmark, was $45.96 per barrel as of November 21, $3.47 per barrel below the price from the same time in 2015. EIA’s November Short-Term Energy Outlook forecasts that both crude oil and gasoline prices will continue to decrease in the coming months, with U.S. average gasoline prices reaching a low of $1.97/g in January 2017.

Surging U.S. oil production (up about 70 percent since 2005) is a key reason for the current abundance of crude globally, the benefit of which is being seen at the gasoline pump and especially appreciated whether we’re traveling far or near. American energy is benefiting American consumers.

We could go on, but let’s just end with a sentiment – that Thanksgiving for all Americans is safe, bountiful and joyful.