We’ve argued before that more restrictive ozone standards imposed by EPA in late 2015 were unnecessary, because ambient ozone levels were declining under the 2008 standards: 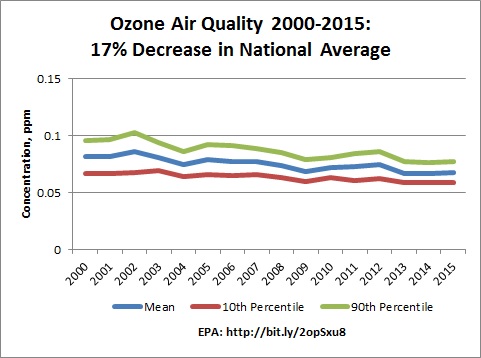 We also pointed out that ozone levels would keep falling as the country worked to fully implement the older standards. Because EPA actually started working on the new, more restrictive standards before the previous standards were completely implemented, it appeared the agency was regulating for the sake of regulating. Unfortunately, EPA’s new standards risked significant impacts on job growth, as it was estimated that the potential number of U.S. counties thrown out of attainment could more than triple.

Now a new report from the American Lung Association shows that, indeed, ambient ozone levels are declining and have done so without implementation of the more restrictive 2015 standards:

The “State of the Air 2017” report shows that cleaning up pollution continues successfully in much of the nation. In the 25 cities with the worst ozone and year-round particle pollution, the majority saw improvements from last year. Many again reached their lowest levels ever of these widespread air pollutants.

Meanwhile, state officials are speaking out about the real-world challenges posed by the duplicative, costly regulations, which could place even rural, undeveloped areas out of compliance – potentially prompting new restrictions on virtually any economic activity. At a recent House of Representatives hearing, Marc A. R. Cone, director at the Bureau of Air Quality at the Maine Department of Environmental Protection, stated:

“In 2008, EPA promulgated an ozone standard to replace the 1997 ozone standard. The EPA did not issue the implementation regulation for the 2008 standard until 2015, seven years after promulgation of the standard. Then, a few months later in 2015, the agency promulgated a new ozone standard to replace the standard for which implementation guidance had only recently been provided. … In a state where the manufacturing industry is still a significant part of our economy, every bit of regulatory certainty can be critical when competing in the global economy.”

And, Nancy Vehr, air quality administrator at the Wyoming Department of Environmental Quality:

“Wyoming’s characteristics as an expansive, high-elevation, sparsely populated rural state differs from EPA’s traditional focus. As a result, we face unique challenges in implementing the EPA’s Ozone Standards in Wyoming. … Wyoming’s experience highlights why a one-size-fits-all approach to ozone is not defensible. One-size-fits-all does not fit Wyoming.”

The ALA report should give added impetus to legislation under consideration in Congress that would give state and local regulators sufficient time and flexibility to implement EPA’s new ozone standards – while protecting public health, reducing emissions and minimizing the standards’ impact on economic growth and easing the potential burden on states and businesses.

To avoid unnecessary economic damage while meeting U.S. environmental and energy needs, forward-thinking regulatory reform should be a priority for Congress and the Trump administration.