Important numbers in the ongoing public debate over whether to increase oil and natural gas development offshore:

What we see here is a serious disconnect between current U.S. offshore policy and reality – that with the U.S. and the world projected to see significant growth in energy demand, the United States has more than 90 percent of its offshore reserves locked away, unavailable even for the studies and tests needed to determine the potential size and location of those reserves.

Given the long lead times needed to develop the offshore, the United States’ current policy posture needs a course correction. Thus, discussion this week of House legislation – one of a number of initiatives – that would help lead to increased offshore energy development. Provisions in the “Accessing Strategic Resources Offshore Act” include:

Erik Milito, API’s director of upstream and industry operations, testified at a subcommittee hearing on the proposal:

“Our nation should produce more of the oil and natural gas Americans need here at home. And it can. This would strengthen our energy security and help put downward pressure on prices while also providing many thousands of new jobs for Americans and billions of dollars in additional revenue for our government.”

“We have a tremendous resource base with which to meet our growing energy needs. Based on conservative estimates, we have enough oil and natural gas to fuel 171 million cars for 50 years and heat 68 million households for more than three centuries. And it’s likely there is much more oil and natural gas than was previously known in areas where the industry has been unable to explore. But we must institute effective policies to promote exploration for and production of resources in new areas, so that we are able to secure the oil and natural gas resources required to fuel our economy and to meet the demands of consumers for affordable energy supplies. New technologies allow us to explore for and access resources that once were thought unreachable, particularly in offshore oil and natural gas development.”

The heart of the offshore issue is access to offshore reserves. Oil and natural gas companies currently are restricted to three of 26 offshore planning areas – the western and central Gulf of Mexico and Alaska’s Cook Inlet. The current federal five-year plan, which the Trump administration is working to replace, keeps so much offshore acreage off the table for future development, there’s virtually no opportunity for preliminary assessments to see how much offshore oil and natural gas the United States has. This disadvantages the U.S. with respect to a number of other nations that are actively exploring, for example, in the Atlantic and Arctic oceans. Milito:

“You look at the underlying [federal] statute … it really directs the government to expeditiously develop these areas. … From a knowledge and information-gathering aspect, there’s been really no opportunity for us to look in other places like the Atlantic to see what the geology looks like. Because we have this limitation within this five-year plan, we don’t even have the ability to go and look and see what might be out there from a geologic perspective … That puts us at a huge disadvantage because the entire Atlantic is being explored outside the U.S. … From a national security standpoint, when we’re not looking at new areas, which would be producing 10, 15, 20 years ago, we are in some respects turning that power and that ability to develop those resources to other parts of the world for the long term.”

For economic reasons we need a robust offshore energy program as well. A study a few years ago projected tens of thousands of jobs could be supported in North Carolina, South Carolina and Virginia by offshore energy activity. South Carolina State Sen. Stephen Goldfinch told the subcommittee that offshore development is economically important to coastal states as a whole:

“[A]s you consider this subject, it is imperative that you remember places like Andrews and Conway, and Georgetown South Carolina, where the ‘golden egg’ of tourism hasn’t helped eradicate poverty. For those who live in Andrews and Conway and Georgetown, oil and gas would be their ‘golden egg,’ bringing non-seasonal, high-paying jobs – that don’t require a college-degree – and hope for a prosperous economic future for the generations to come. The time is right to capitalize on this opportunity and the need in those towns and other places in South Carolina could not be greater or more urgent.”

The safety of offshore energy development, Milito said, is “characterized by continued advancement of technology and systems integrity, the application of extensive industry technical standards and a robust regulatory regime.” API offshore standards cover everything from well construction to platform stabilization to cutting-edge technologies for blowout prevention and well containment. The strength of these standards is recognized by the Bureau of Safety and Environmental Enforcement, which references 96 API standards in its offshore regulations. More than 130 API standards are referred to more than 430 times by agencies, including the U.S. Coast Guard, EPA, the Federal Trade Commission and the Pipeline and Hazardous Materials Safety Administration.

Meanwhile, through the Center for Offshore Safety, companies are committed to improving their safety and environmental management systems that embed the management of safety into business processes. Former U.S. Sen. Mary Landrieu of Louisiana told the subcommittee that the U.S. can have safe offshore energy development that advances energy security and supports economic vitality and healthy, multi-purpose coastal areas:

“You can have a coast that is a working coast for fisheries, commercial, recreation, eco-tourism, barges, ships, tourism, hotels – we have it all. Now there are risks associated with any kind of economy … But the whole idea is if you’re careful enough and respectful enough you can have a coast that works and employs people. … We have men and women graduating from high school that are going to work in the oilfield and they don’t make minimum wage. They can make $80, $90, $100,000 a year. And that means a lot to their families, and it sends a lot of kids to college from south Louisiana.” 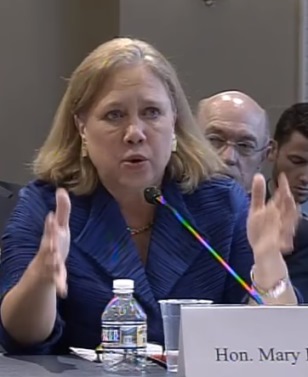