College basketball’s big event tips off this week in arenas across the country, all leading up to the NCAA Championship game April 2 in San Antonio. Along the way, underdogs will show some bite and favorites will fall, busting brackets all across the country. Enjoy!

Through it all, one of the MVPs won’t be a star on the tournament’s top-seeded team or someone who hits a buzzer-beater that takes “Cinderella” deep into the Big Dance. The unsung MVP during the madness that is the NCAA tournament will be natural gas and oil.

Let’s look at a number of the roles petroleum plays in almost every aspect of this great game and event.

Player uniforms originally were made from cotton or wool. The word jersey, in fact, refers to the style of the knit made from wool. Today’s jerseys are lighter and thinner, thanks to polyester materials like Climacool®, Dri-FIT®, or DryCELL® that wick away heat and moisture and keep athletes cooler on the court. Polyester is a synthetic fiber most commonly produced from polyethylene, a gaseous hydrocarbon extracted during the refining process.

Similarly, the shoes worn by players have become marvels of chemical and physical engineering. The science of sneaker design is actually quite impressive and generally relies on polyester, nylon, synthetic leathers, plastics and rubber compounds to provide durability, superior traction, and even moisture wicking to keep the feet cool and dry while running the hardwoods. All of these materials are produced with chemicals and materials that come from natural gas and oil.

Speaking of the court, one of the most distinctive sounds of basketball is the high-pitched squeak of rubber soles on the high gloss wood flooring. It’s almost impossible to imagine basketball without the cacophony of screeches the players’ shoes make as they dart around the floor. Again, think petroleum.  The floors in college and professional arenas are made from very precious hardwoods and sealed with polyurethane coatings that give them that glossy shine. Together with the rubber soles, the urethane finish on the floor increases grip so the players can pivot, cut and slash with confidence on the way to the hole. 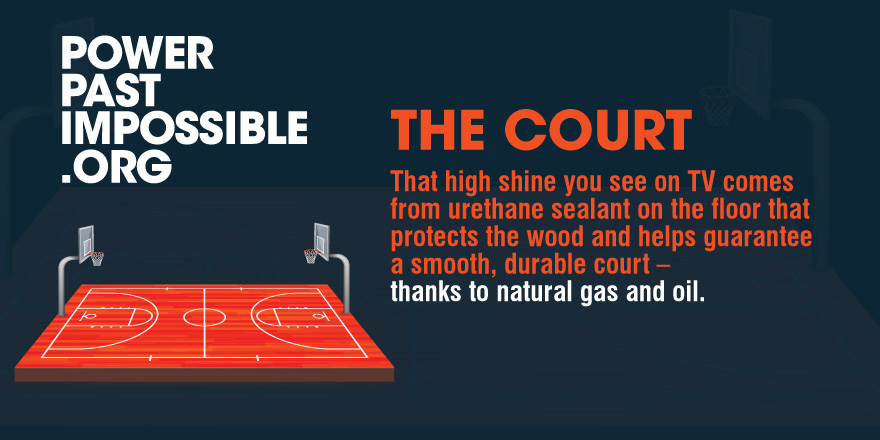 Top players like Oklahoma’s Trae Young and Villanova’s Jalen Brunson  probably aren’t giving a lot of thought to the materials that make up the net. But whether they’re throwing down or dialing long distance, the swish they’ll hear is due to chemicals that come from a natural gas and oil process called “cracking” which uses combinations of heat, pressure, and catalysts to separate the hydrocarbon chain to produce different chemical compounds such as methane, propane, ethylene, naptha, benzene and others. These chemicals are then combined through other processes to make things like nylon, polyethylene (a key component of polyester) and polypropylene. Both NCAA and NBA nets are made of these materials. There’s more. Isobutylene and isoprene, two other materials made possible by cracking, are combined to form butyl rubber, which  forms the bladder of official NCAA game balls. The ball’s outer covering is a composite leather typically separated from the bladder by a nylon layer that helps  ensure that “the rock” is, in fact, perfectly spherical. The leather, wrap and bladder combine to make every dribble, bounce pass and rebound happen. Off the court and in the stands, natural gas and oil power the game for fans as well. Everything from plastic stadium chairs to the construction of LED lighting systems that illuminate the games with minimal glare from the the hardwood finish rely on thermoplastic components.  Arenas rely increasingly on natural gas-fueled electricity. In 2017, natural gas provided 32 percent of the country’s electricity generation – more than any other source. The added dividend is that as natural gas has become America’s preferred fuel source for electric generation, emissions of carbon dioxide have fallen. Mostly because of increased use of natural gas, CO2 emissions from the power sector are at their lowest point in nearly 25 years.  By 2030, these emissions could drop as much as 30 percent from 2005 levels, primarily as a result of continued fuel switching to natural gas.

The fact is, basketball has come a very long way since James Naismith created the game in 1931. Back then, the “net” was a peach basket nailed to a wooden plank, and every basket resulted in stoppage of play to retrieve the ball. Only later was the bottom cut out of the basket to allow easier return of the ball to play.

While that game was a far cry from the fast-paced, high flying, display of athletics it is today, throughout history one thing that has made it better is advancement in the gear and game made possible by natural gas and oil.