Meeting short-term crude oil storage challenges has our industry looking at a number of measures to safely route and handle the surplus resulting from the demand decline tied to global efforts to slow the spread of COVID-19.

API President and CEO Mike Sommers told CNBC that the industry is thinking outside the box to find “creative solutions” to ship and store an historic amount of oil beyond its usual means.

To be sure, there also are separate infrastructure challenges in getting crude oil to where there is storage. Many pipelines in the nation’s transportation network are full up or contracted – partly reflecting the country’s infrastructure needs that pre-date COVID-19. That’s a subject for a separate post. The fact remains industry is focused on finding storage as markets rebalance between supply and demand.

Industry has welcomed the U.S. Energy Department’s offer to help through leased storage in the Strategic Petroleum Reserve (SPR). Sommers said the SPR arrangement should include flexible terms so that producers are able to participate if they want to.

Otherwise, a number of other options are developing, as conventional onshore storage at Cushing, Oklahoma, is close to full.

Start with filling a growing flotilla of oil tankers with crude oil and parking them just offshore or at sea – a solution the industry has the logistical know-how and engineering expertise to optimize. In February there were about 10 tankers storing oil; that number has topped 100, according to maritime industry reports.

Storage tanks used at shale drilling sites are being offered to store the surplus oil, and pipeline companies have proposed using some of their lines for storage. Other companies that have access to underground natural gas liquids storage might use it for crude instead.

Sommers doesn’t sugarcoat the challenge posed by a lag in oil demand: “Of course you see the supply issues, but the demand issues remain the most important issue here.” He cited recent news reports on the possibility of global demand falling by tens of millions of barrels per day, which could challenge existing storage. The U.S. Energy Information Administration (EIA) reported that as of Wednesday, Cushing was at 81% of capacity.

What the government should not be doing is paying producers not to produce, Sommers added during the CNBC interview. The market provides the best signal for industry to level out production until the price point rebounds, he said.

In the meantime, the industry will remain committed to using the best storage practices to ensure worker safety, environmental protection and economic efficiency. API has developed safety standards and good engineering practices, which the industry uses for the safe operation of the large steel and concrete enclosures, as well as underground facilities, at onshore terminals. 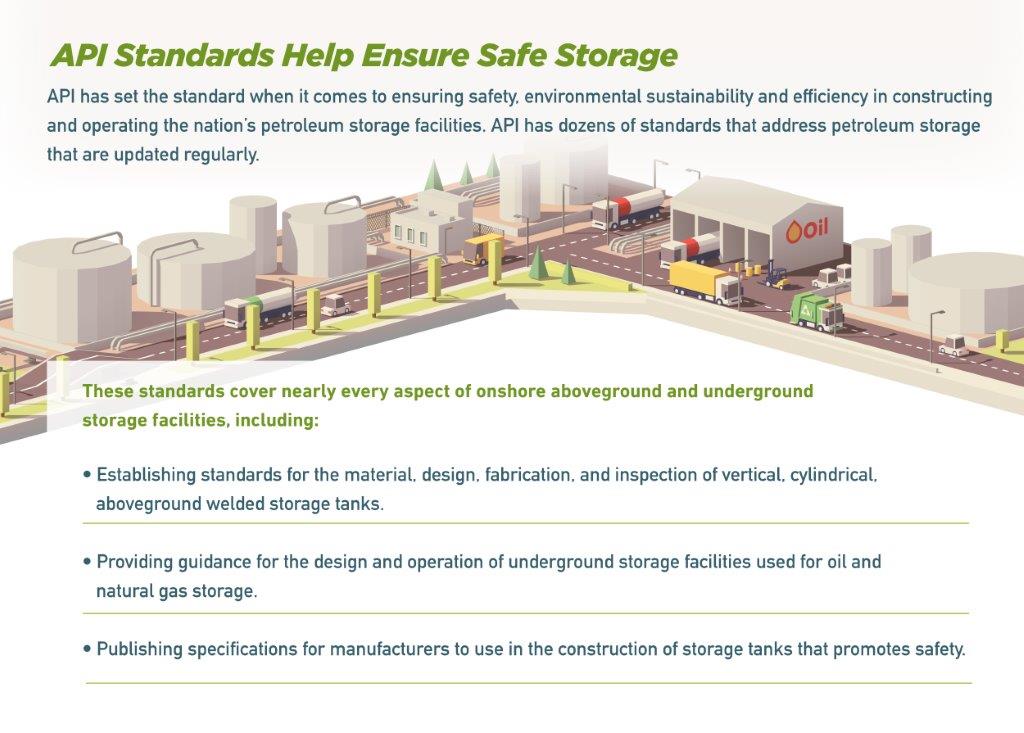 Worker and community safety is paramount. Much of the country’s onshore oil storage, in steel-bolted tanks was designed and constructed using API safety standards to ensure safety in handling crude oil and other liquids.

Other standards cover the materials, design, fabrication and testing requirements for vertical, cylindrical, above-ground, closed-top, welded and steel-bolted storage tanks that can store between 500 to 10,000 barrels. These cylindrical structures can typically be found at oil terminals along the coast of the United States.

API also provides standards for the construction, design and operation of underground oil storage facilities, which can also be found throughout the U.S. oil patch, and make up a portion of the SPR.

John Siciliano is a writer for API Global Industry Services’ Marketing and Communications Department. He joined API after 14 years as an energy and environment reporter and editor. Most recently, he was senior energy and environment writer for the Washington Examiner and the Daily on Energy newsletter. He began full-time reporting in Washington in 2001 as a foreign affairs correspondent, also covering national security and defense. His coverage of the Mideast and Saudi Arabia led him to become a full-time energy reporter. He earned a bachelors degree in psychology from Ohio Northern University, and he also holds a Masters of Science degree in education from the Franciscan University of Steubenville.