Liquefied natural gas (LNG) is redefining the world’s modern energy mix. Even as the coronavirus and government responses to the pandemic have cut into natural gas demand, analysts project a progressive recovery and long-term growth for U.S. LNG – particularly in emerging markets – due to its enduring economic competitiveness and environmental benefits.

In South Asia, the affordability of American LNG is expected to increase consumption, displacing demand for coal, as countries such as India and Bangladesh seek out reliable, lower-carbon energy resources.

But the global trend toward low-cost natural gas, driven by surging supplies of U.S. LNG, was developing well before the coronavirus pandemic. Since 2016, America has expanded export capacity, delivering an abundance of LNG to the global marketplace and driving spot prices to record lows in North America, the European Union and across Asia.

By producing and exporting natural gas from domestic shale, the U.S. has been developing a cleaner and more affordable power generation recipe. Between 2005-2018, carbon dioxide emissions from the U.S. power sector declined by 28%, with natural gas accounting for more than half of the reductions, and domestic coal-fired power generation fell again by an estimated 18% in 2019.

Likewise, the European Union – the top destination for U.S. LNG in 2019 and so far in 2020 – is experiencing emissions savings from coal-to-natural gas switching, as coal output across Italy, France, Germany, Spain, Portugal and Britain fell 40% between 2018-2019, and the continent is on track to set record reductions in coal capacity this year.

The global coal-fired power fleet shrank in the first half of 2020 for the first time on record, signaling a profound shift in the global energy mix. With abundant American LNG, natural gas has become a feasible, cost-effective alternative to coal capacity in India, Bangladesh and numerous other countries across Europe and Asia. In India, where coal still accounts for 74% of electricity generation, the API study finds that American LNG delivers 48% fewer emissions than either U.S. or domestically produced coal. Given historically low spot prices, the post-pandemic recovery could accelerate India’s energy transition, further reducing greenhouse gas emissions from one of the world’s top energy consumers.

Typically, emerging markets have proven difficult for U.S. LNG suppliers to penetrate, but demand growth in South Asia demonstrates that this conventional wisdom no longer holds.

In April, the coronavirus-induced shutdown forced India’s LNG imports to three-year lows, but by May imports had already rebounded 22.4% month-over-month and then 37.6% month-over-month in June. According to the nation’s Central Electricity Authority, natural gas consumption in power plants rose by 11.7% in Q2 2020, reaching the highest levels of natural gas use by Indian power plants in more than three years.

The government aims to increase the share of natural gas in the nation’s energy mix to 15% by 2030 – up from 6% earlier this year – reflecting the focus on reducing emissions and improving local air quality, while ensuring grid reliability. Remarkably, lower demand for coal combined with the pandemic-induced economic slowdown caused the first year-on-year decline in India’s carbon dioxide emissions in four decades.

Since receiving its first LNG shipment in 2004, India has doubled its import capacity over the past decade to meet growing energy demand, and the U.S. Energy Information Administration expects it to increase another one-third by 2023, given adequate infrastructure expansion.

Among Indian utility providers, cost competitiveness was cited as the major incentive for coal-to-natural gas switching, and with ongoing pipeline buildout and related tariff reforms, there remains the potential to introduce additional lower-carbon generating capacity, fueled by U.S. LNG. 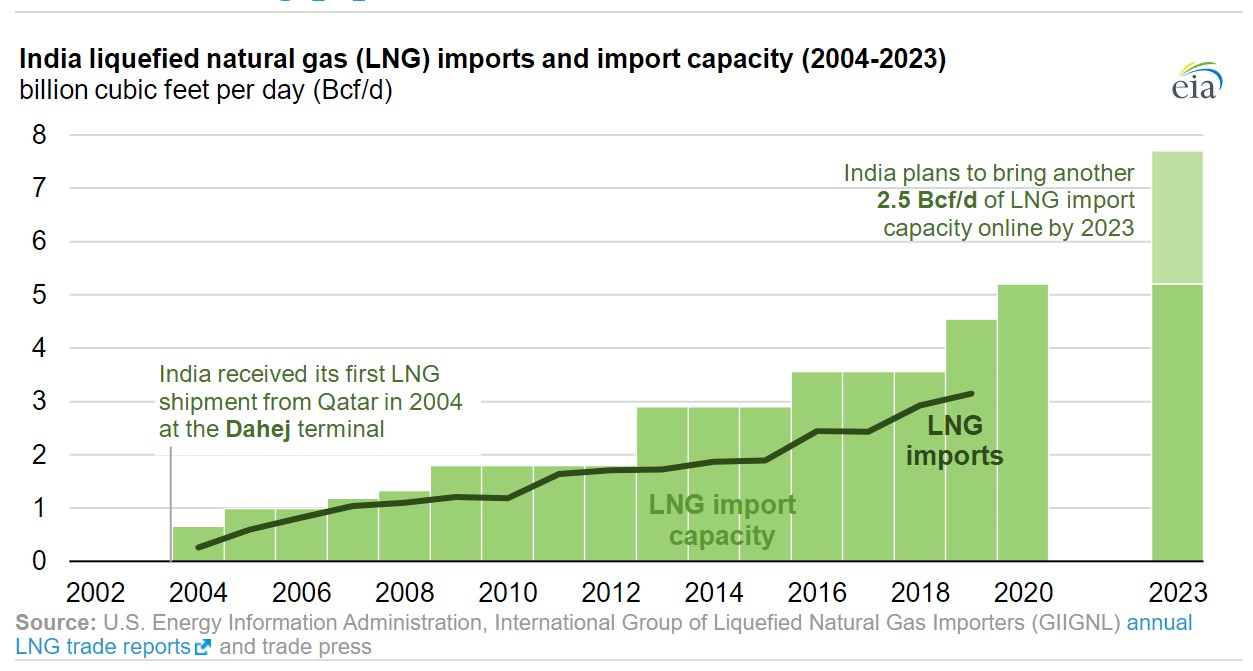 While only about 3% of the country’s power currently comes from coal, Bangladesh was preparing to significantly increase coal-fired generating capacity over the next two decades. Instead, the latest draft of the nationwide power development plan focuses on importing LNG as a cleaner and more affordable alternative.

For Bangladesh, coal is increasingly at a price disadvantage compared to other fuels, including renewable resources, which stand to complement the flexibility and dependability of imported LNG.

Additionally, the International Energy Agency projects that industrial demand for natural gas in India and other Asian markets will become a major source of post-pandemic growth, accounting for 40% of incremental consumption by 2025. As such, U.S. LNG exports will be essential to supporting the region’s economic recovery across multiple sectors, including industrial, residential and commercial.

Access to affordable natural gas is key to sustainable development, particularly in regions experiencing energy poverty. Exportable LNG promotes electrification and modern cooking facilities, making it possible to improve economic outcomes and enhance the quality of life for millions in South Asia and around the world.

By now, the advantages of U.S. natural gas development and LNG exports are widely appreciated. When natural gas displaces coal, it delivers both economic and environmental benefits, incentivizing future-focused energy transitions in emerging markets – during a period of global economic recovery, no less.

“U.S. LNG exports can help accelerate environmental progress across the globe, enabling nations to transition to cleaner natural gas to reduce emissions and address the global risks of climate change.”

Sam Winstel is a writer for the American Petroleum Institute. He comes to API from Edelman, where he supported communications marketing strategies for clients across the firm’s energy and federal government practices. Originally from Dallas, Texas, Sam graduated from Davidson College in North Carolina, and he currently resides in Washington, D.C.