Let’s take a look at some visuals that illustrate these important points.

Natural gas and oil company earnings generate lots of attention, especially when viewed in the small context of quarterly reports issued by companies. Looked at quarterly 2018-2021, oil and natural gas earnings per dollar of revenue (percent) in the red bars are in line with those of all other S&P 500 sectors. This chart shows the impacts of the 2020 economic slowdown associated with efforts to combat the pandemic, impacts that lasted into the first quarter of 2021. 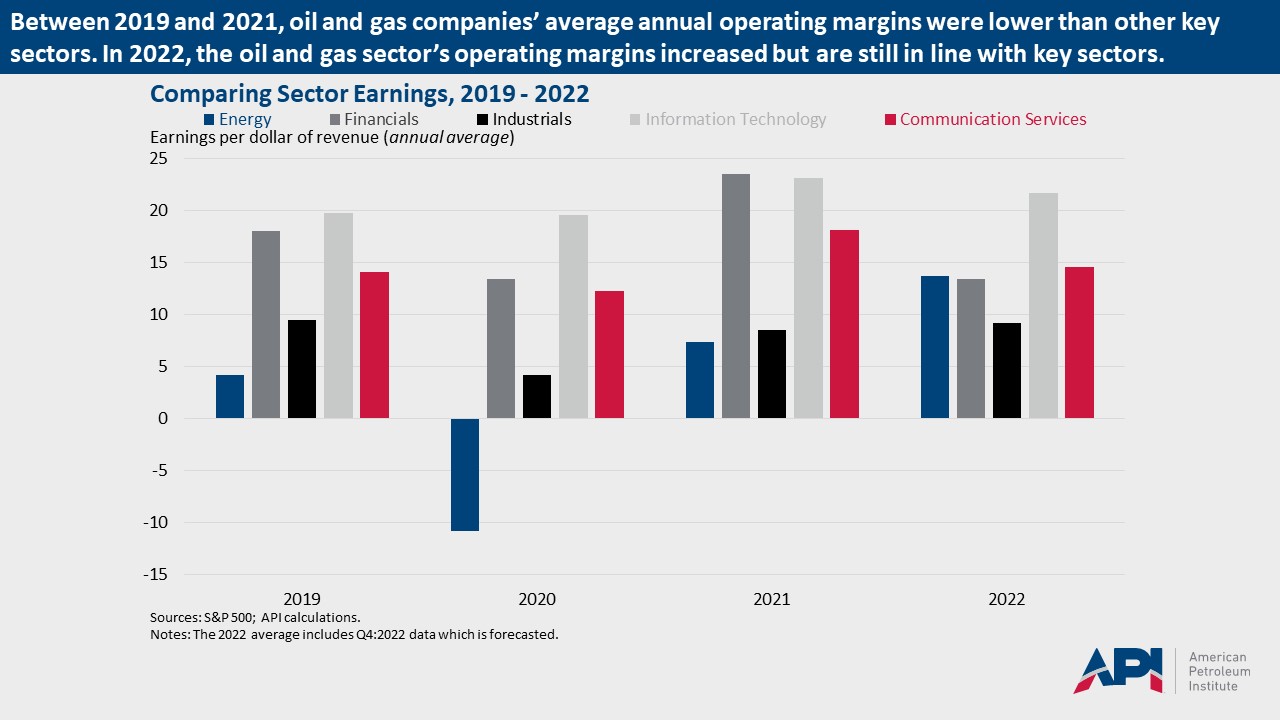 Relative to other S&P 500 sectors, oil and natural gas earnings can fluctuate to a greater degree, because of lags in the sector’s response to rapid changes in demand. Between 2018 and 2021 oil and natural gas earnings – defined as net income divided by overall revenue – were not out of line with those of other S&P 500 sectors: finance (banking and consumer finance), industrials (capital goods and transportation), information technology (IT services and electronics), and communication services (providers such as AT&T). Who owns America’s natural gas and oil companies? Millions of Americans – through retirement funds like 401-Ks and private and public pension funds (typically accessible by groups including teachers and firefighters). Financial institutions and investment advisors, including those who manage investor assets for a fee, also hold significant portions of oil and gas stocks. These include endowments, governments, hedge fund managers, banks, insurance companies, corporations, private equity firms, holding companies and others. The percentage owned by individuals – corporate officers and retail owners – is just 2.4%, countering the repeated claim that large amounts of natural gas and oil industry stock are owned by oil and gas corporate officers. 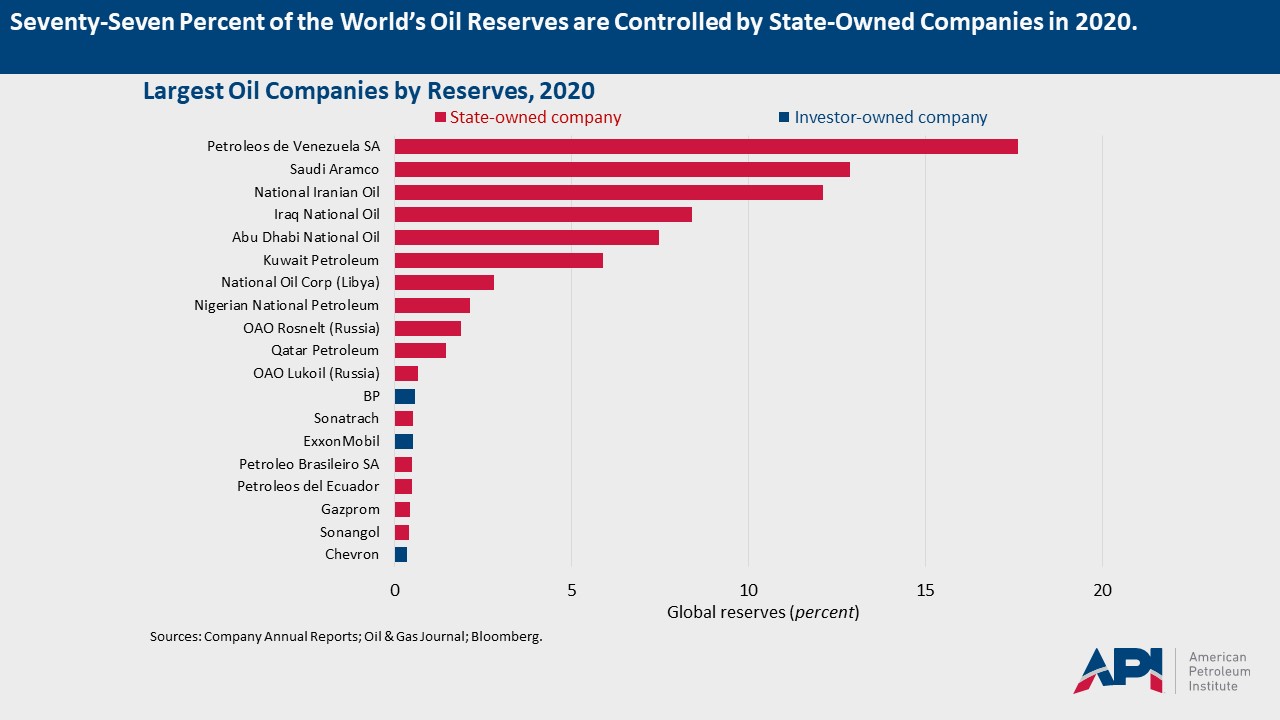 “Big Oil” is a relative term. As shown above, 16 of the top 19 oil companies in 2020, ranked by percent control of global reserves, were state-owned companies – including the top 11, and they controlled 77% of the world’s crude oil reserves. This underscores the critical importance of America’s natural gas and oil industry to ensuring U.S. energy security. Maintaining and growing a robust American oil and natural gas sector reduces U.S. dependence on foreign suppliers who don’t share America’s values and priorities. 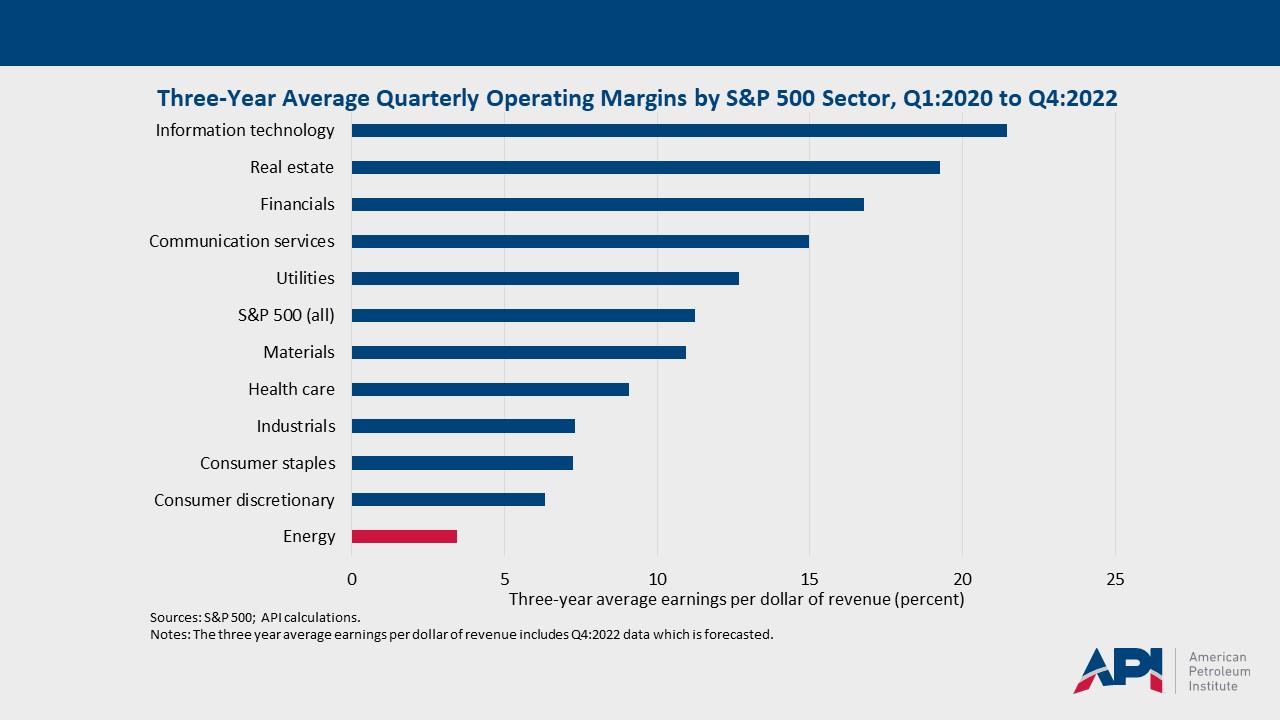 Total returns include interest and capital gains, as well as dividends and distributions such as stocks – benefiting investors in each sector. Natural gas and oil companies’ three-year annualized total returns of about 11.5% were in line with the three-year annualized total return for the S&P 500 of about 15%. This speaks to the value of investing in oil and gas relative to other economically viable S&P 500 sectors.