Prices Impacts at the Pump? 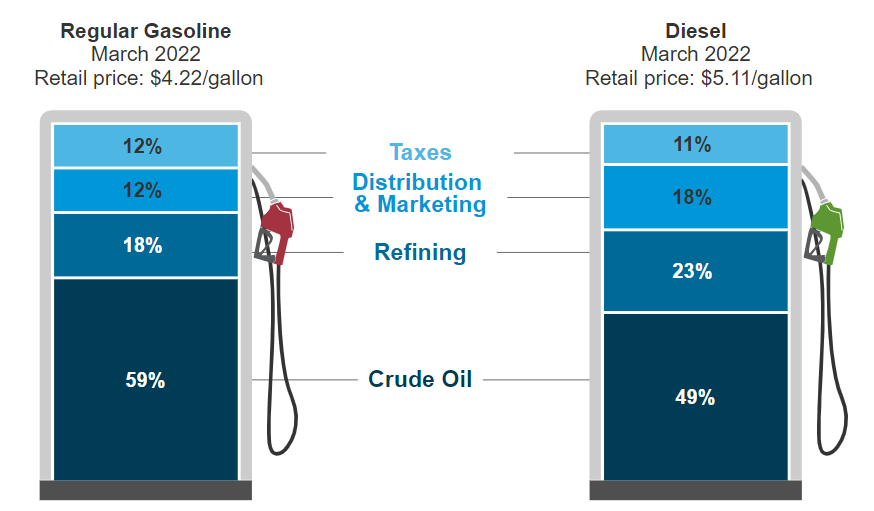 What Determines the Cost of Crude Oil?

The cost of crude oil is the largest factor in the retail price of gasoline. Because of this, changes in the retail price of gasoline typically track changes in the global crude oil price. Crude oil prices are impacted by geopolitics, global market fundamentals, including supply and demand, inventories, seasonality, financial market considerations and expectations.

Taxes Add to the Price of Gasoline.

Federal, state, and local government taxes also contribute to the retail price of gasoline. The federal excise tax is 18.40¢ per gallon (cpg), and state gasoline fees and taxes range from a low of about 15 cpg in Alaska to as much as 68 cpg in California and around 59 cpg in Illinois and Pennsylvania. On average, state taxes and fees average about 39 cpg and when combined with federal taxes average 57 cpg at the pump. Sales taxes along with taxes applied by local and municipal governments also can add to gasoline prices in some locations.

In addition to purchasing the crude oil, the refinery incurs costs associated with processing the crude through the refinery to produce gasoline, diesel and other petroleum products. Refining costs vary seasonally (e.g., higher production costs for summer blend vs. non-summer gasoline blends) and by region of the United States, partly because of the different gasoline formulations required to reduce air emissions in different parts of the country. In addition, as more people drive in the summer, there is increased demand for gasoline generally resulting in upward pressure on prices. Gasoline prices are also affected by the cost of other components that may be blended into the gasoline, such as ethanol.

Who Owns and Operates the Gas Stations?

Less than one percent of all convenience stores that sell gasoline are owned by major oil companies. Virtually all gas stations are independently owned – not owned by major oil companies – and of those, about 60% are owned by individual owners. Retail stations set prices to be competitive in their local market. They must factor the need to pay for the next delivery of gasoline (i.e., replacement costs) into the price they set. If supply is seen as dropping relative to demand, this can place upward pressure on price and can be factored into the retailer’s pricing decision. While gasoline prices have historically been close to prices paid at the distribution terminal supplied by refiners, the price at the pump also reflects local market conditions.

API Chief Economist Dean Foreman explains what’s behind rising gas prices, including the impact of the Russia/Ukraine conflict and the Biden administration’s decision to ban imports of Russian oil. Foreman also discusses how U.S. producers are responding and what actions the White House can take to strengthen American energy security.

Thank you for Subscribing Unable to Process Request x Top