Energy is that rare issue to achieve broad support across the political spectrum. A recent poll found that 73 percent of all voters – including 67 percent of Republicans, 76 percent of Independents and 79 percent of Democrats – support establishing a national energy policy that ensures a secure supply of abundant, affordable and available energy in an environmentally responsible manner.

The poll makes clear that the American people expect their political leaders to set aside political posturing and partisan ideology and to approach our nation’s energy future in a spirit of cooperation and constructive compromise, and to focus on doing what’s best for consumers and what’s right for our economy and environment. 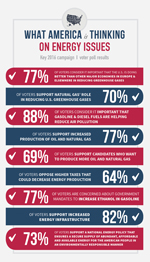 What America is Thinking on Energy Issues

A Decade of Growth

A Decade of Progress

"The U.S. would not have been where it is today in reducing carbon were it not for the advance of shale gas" - Daniel Yergin