Timing is everything. With much of the Middle Atlantic braced for “Snowzilla,” the Obama administration announced a new layer of federal regulation that likely will make it more difficult and costly for energy producers to deliver the affordable, reliable, clean-burning natural gas that so many U.S. consumers rely on for winter warmth.

Imagine: Millions of Americans, covered in snow and ice, as the president and his team advance a regulatory blizzard with unnecessary Bureau of Land Management (BLM) rules on methane that ignore emissions reductions already being realized and that threaten to stifle future production – potentially at great cost to consumers, the economy, government revenue streams and U.S. security. Erik Milito, API upstream and industry operations group director:

“We share the desire to reduce emissions and are leading efforts because capturing more natural gas helps us deliver more affordable energy to consumers. The incentive is built-in, and existing BLM guidelines already require conservation. Another duplicative rule at a time when methane emissions are falling and on top of an onslaught of other new BLM and EPA regulations could drive more energy production off federal lands. That means less federal revenue, fewer jobs, higher costs for consumers, and less energy security.”

What we know is that since 2005, methane emissions from hydraulically fractured natural gas wells have fallen 79 percent, according to EPA data. This, even as natural gas production has continued increasing: 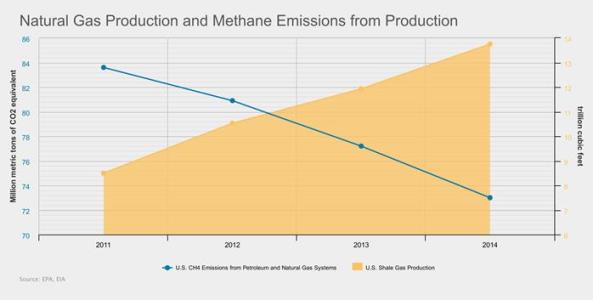 Together with oil production, this is helping lower costs for consumers in terms of heating fuels … … as well as the cost of electricity – more and more of it being generated by natural gas:

“[W]e know what works, because it is today’s reality. Just a few years ago most opinion leaders were encouraging low energy economies, and restricted energy choices, because it was accepted that increasing energy production – particularly production of fossil fuels – was not compatible with protecting the environment. Yet the next president of the United States will inherit a country with a growing population and a growing economy, with record production of U.S. oil and natural gas, and at the same time, EPA reports declining emissions of criteria air pollutants and near 20-year lows in greenhouse gas emissions. … It is a market-driven, consumer-focused approach to energy policy that benefits our nation’s economy, the environment and energy users here and around the world. And it recognizes that market forces, driven by consumer preferences, are far better able to achieve our nation’s energy, climate and economic goals than government mandates and regulatory dictates.”

Unfortunately, the reality of which Mr. Gerard speaks apparently is missed by the administration, which instead is opting for unnecessary rules that could undermine the dynamics that have made the United States both the world’s leading producer of oil and natural gas and the leader in reducing greenhouse gas emissions. We’d call that an example of snatching defeat from the jaws of victory.

Constraining policies – such as the BLM proposal – will constrain energy development, production and distribution, Gerard said, costing the economy and consumers “billions of dollars over the next several decades.” A study by Wood Mackenzie estimates that policies like BLM’s proposal, which discourage energy development, could reduce U.S. GDP $138 billion in 2025 and lead to cumulative decrease in revenue to the government of $500 billion from 2016-2035. The cost of energy annually for the average household would increase by $242, the study said.

A direct impact of BLM’s proposal would be to add another obstacle to energy production on federal lands – which already lags well behind production on state and private lands. Milito said federal data show flat oil production between 2009 and 2014 on federally controlled land, while natural gas production declined 35 percent. Contrast that with private and state lands, where development doesn’t need permission from the federal government: crude oil production up 88 percent, natural gas up 43 percent: 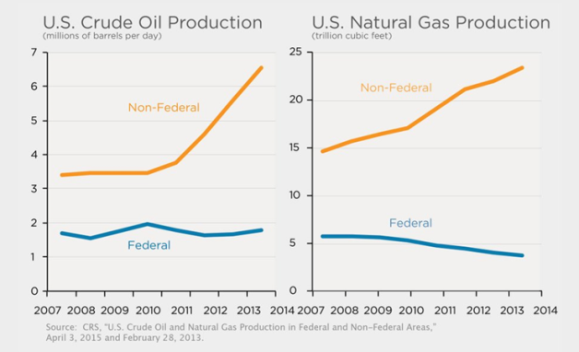 “Today, less than 10 percent of BLM’s federally managed surface and mineral estate is currently leased for oil and natural gas development. And on lands administered by BLM and leased to energy companies, only a fraction of the total acreage under lease is occupied by surface operations for exploration or production – about 1 percent. … [T]he glaring difference between production on federal land and state and private land isn’t just bad energy policy, it’s also bad fiscal policy. If production on federal lands had grown at the same rate as overall U.S. production, from 2009 through 2014, total royalties would have been 22 percent higher, with an additional $11.0 billion in royalties collected by the federal government. This stark difference isn’t due to geology. It is due to a political ideology that ignores the important, foundational role of fossil fuels to our modern society, and I would suggest that point of view should be consigned to the history books, not imposed on the American consumer.”

The BLM proposal is part of a regulatory wave that dismisses U.S. successes and the best interests of American consumers. Regulatory overreach in the energy space is a key touch point for U.S. voters as Campaign 2016 swings into full gear. As Gerard told USEA, the United States has a generational opportunity to harness domestic energy and collect the benefits that belong to an energy-secure nation – if Americans insist on energy leadership that fosters that opportunity instead of squandering it. Gerard:

“API’s position is that being the world’s number one oil and natural gas producer and world leader in reducing greenhouse gas emissions requires that we get our nation’s energy policy right today. It is also our position that energy policy isn’t a Democrat vs. Republican, liberal or conservative issue. We believe it is a job growth, economic opportunity and American global energy leadership issue. Our shared goal should be to create a new American understanding of energy -- and with it a national energy policy -- based on science, the free market and entrepreneurial spirit because energy is too important and fundamental to our way of life for anything less than our collective best efforts to that end.”