Another Big Reason to Open ANWR for Safe Development

We’ve talked at length about the many benefits to opening up a small portion of the Arctic National Wildlife Refuge (ANWR) to natural gas and oil development. There can be little doubt about ANWR’s importance to Alaskan jobs, economic growth and the United States’ long-term energy security.

The point is underscored in a new report from the U.S. Energy Information Administration (EIA), analyzing the potential impact of natural gas and oil development in the coastal plain of ANWR. The results reiterate what we’ve been saying all along –  ANWR’s energy potential is incredibly large, and is a key part of a long-term U.S. energy vision.

First, some background: Tax reform legislation passed last December required the U.S. Interior secretary to establish and administer a competitive program for the leasing, development, production and transportation of natural gas and oil in and from the ANWR coastal plain, also referred to as the 1002 Area. Previously, ANWR was under a drilling moratorium. Because the law was passed after the modeling was completed for EIA’s Annual Energy Outlook 2018 (AEO2018), this week’s new report estimates the impact of the tax law on the AEO2018 projections. So, let’s look at EIA’s new details on ANWR.

Billions of Barrels of Oil

In short, the report’s high-case scenario projects that developing a small portion of ANWR’s coastal plain – drilling and production sites limited to an overall surface footprint of just 2,000 acres – about the size of a big-city airport – will boost U.S. oil production after 2030 and through 2050 a cumulative 5.1 billion barrels more than the reference case in AEO2018. EIA also says that crude oil prices are sufficient to support ANWR development, given the assumed resource base and cost estimates. Below, EIA’s chart showing high, mean and low projections compared to the AEO2018 reference case: 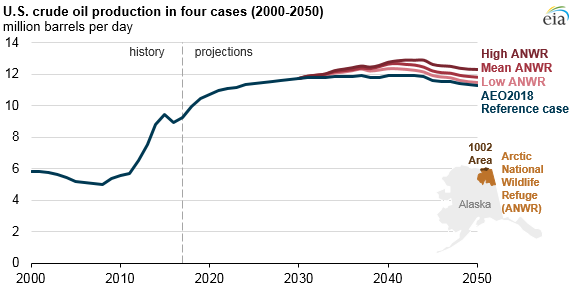 Opening a small portion of ANWR to energy production could create tens of thousands of American jobs and contribute to significant economic growth. In addition, development is estimated to bring in between $150 billion and $296 billion in new federal revenue.

Perhaps this is why development is supported by a majority of Alaskans, the Alaska State Legislature, and many of the North Slope tribal and village leadership. Lisa Murkowski, U.S. Senator from Alaska:

“A strong majority of Alaskans have long recognized the opportunity the 1002 Area presents. That’s why we undertook an open process last fall to debate the merits of responsible development.… [W]e have greater reason than ever to be confident in our ability to safely access these resources… [and] Alaskans will clearly benefit from new jobs and revenues.”

Production from ANWR won’t start until 2031 because of the time needed to acquire leases, explore and develop the required production infrastructure. Fortunately, officially have already taken steps toward tapping this expansive resource.

Interior issued a notice in April starting a 60-day review to sell natural gas and oil leases in the region, a process that includes seeking input from the public through meetings in Anchorage, Fairbanks, Utqiagvik, Kaktovik and Arctic Village – the last two of which are located within the refuge. Joe Balash, Interior assistant secretary for land and minerals management:

“Developing our resources on the coastal plain is an important facet for meeting our nation's energy demands and achieving energy dominance. This scoping process begins the first step in developing a responsible path forward. I look forward to personally visiting the communities most affected by this process and hearing their concerns.”

It’s certainly worth repeating: ANWR is one of America’s most valuable, strategic energy resources, which when it comes online can promote economic growth, increase U.S. energy security and contribute to our country’s prosperity for decades to come.

Jessica Lutz is a writer for the American Petroleum Institute. Jessica joined API after 10+ years leading the in-house marketing and communications for non-profits and trade associations. A Michigan native, Jessica graduated from The University of Michigan with degrees in Communications and Political Science. She resides in London, and spends most of her free time trying to keep up with her energetic Giant Schnauzer, Jackson.