Keystone XL: ‘Put Thousands of Americans Back to Work’

Americans want the Keystone XL pipeline built. There’s no mistaking that in polling, including a new one we’ll get into down below.

Of all the Americans who’ve waited more than four years for the president to give the full Keystone XL the go-ahead, few have more on the line than thousands of building and construction workers. For them it’s bread on the table. Sean McGarvey, president of the AFL-CIO’s Building and Construction Trade Department, talked to reporters this week about his union’s support for the project's approval:

“For the skilled craft professionals that I am privileged to represent, the past four years have not been a recession, they have been a depression. Today, the unemployment rate in the U.S. construction industry is 16 percent.”

API President and CEO Jack Gerard also was on the call and reiterated some of the compelling reasons for the president to approve Keystone XL:

The Keystone XL is “a project that will not only create good middle-class jobs for thousands of the safest, most highly trained workers in the building trades, but will expand access to secure supplies of Canadian crude oil that will be processed in state-of-the-art refineries here in the U.S. It would be an investment in America’s economy and in its energy future.”

Back to public opinion. This project, which has cleared three different environmental reviews by the State Department, is supported by 69 percent in a new Harris Interactive survey of registered voters: 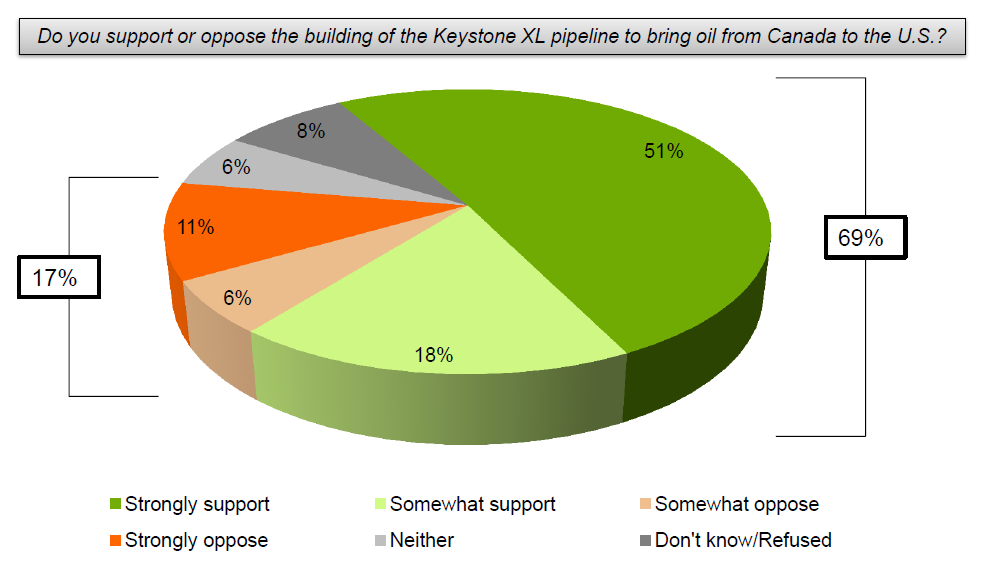 The result is consistent with the strong support registered in a number of national surveys (Rasmussen, Fox News and Pew Research). According to Harris, majorities back the full Keystone XL according to:

Harris also found that 82 percent believe U.S. policy should support the use of oil from Canada, and 83 percent think the Keystone XL would strengthen America’s energy security. Overall, that’s a very strong message – a mandate for action. While a minority (11 percent) strongly opposes the pipeline – and Canadian oil for that matter – the president should listen to the overwhelming majority that considers the Keystone XL a “complete no-brainer,” as Canadian Prime Minister Stephen Harper has called it.

McGarvey said his members are watching. He said he expects the president to do the “right thing” – the thing that’s good for U.S. jobs, good for America:

“There is no reason for any further delay. In fact, there is every reason in the world to approve this project. The Keystone pipeline is critical to our domestic energy industry. And our domestic energy is proving to be critical to the re-awakening of the American economy. This has been the most scrutinized infrastructure project, perhaps, in our nation's history. And at every juncture, concerns about safety and the environment have been met and satisfied. It is now time to build the Keystone XL pipeline and put thousands of Americans back to work.”