“…tonight, I’m directing my administration to open more than 75 percent of our potential offshore oil and gas resources.” -  President Obama 2012 State of the Union

So, 75 percent – that must be good, right?  Well, not exactly.  Let’s take a look at what the Proposed Outer Continental Shelf Oil & Gas Leasing Program 2012-2017 actually provides:

The president wants you to focus on the two numbers on the right, that 77 percent and 78 percent of our potential resources are available.  But the more important number is on the left, showing that only 13 percent of our total outer continental shelf (OCS) acreage is even open to development.  To understand why we need to understand what those oil and natural gas numbers represent – and what they don’t.

What they represent are the undiscovered, technically recoverable oil and natural gas resources of America’s OCS.  Undiscovered means just that: resources that haven’t been found yet but are believed to exist because of past exploration upon which data extrapolations are made. Because these resources haven’t been found, the numbers in the table above are only estimates. But some estimates are better than others.  Why?  Well, mostly because some estimates have more data behind them.  Why?  Because, it turns out, the best way of finding resources is by … looking for them.  Or as the Minerals Management Service (MMS) put it in 1996: “Actual drilling operations are necessary to confirm the presence of oil or natural gas.”

That’s why the more important number in the above chart is that in the president’s proposed five-year plan only 13 percent of the OCS is open to actual drilling operations.

For example, here is a chart showing government assessments in 1996, 2006, and 2011 of undiscovered technically recoverable oil resources in the OCS. Now let’s look at cumulative production of that same period of time: 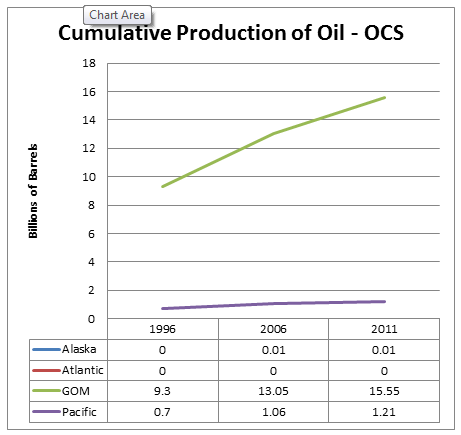 So 75 percent is a nice number for speeches, but a policy of putting 87 percent of the OCS off-limits not only limits our current and future production, it also leaves us guessing as to our potential.