For a better understanding of oil and natural gas industry earnings, take a look at a pair of blog posts by ExxonMobil’s Ken Cohen (here and here), effectively countering criticisms of  the company’s earnings by those who also call for new energy taxes.

Perspective: Though ExxonMobil’s earnings are large, it earned only about 8.5 cents for every dollar of global revenue, which is less than half the earnings per dollar of sales for companies selling smart phones, computers, beverages and other commodities.

Perspective: Over the past five years, Cohen notes, ExxonMobil’s U.S. tax expense was $57 billion -- $18 billion more than the company earned in the United States over the same period. In 2011, ExxonMobil’s $12.3 billion in tax expenses exceeded its U.S. earnings of $9.6 billion. The chart below shows that averaged over 2005-2009, ExxonMobil’s effective tax rate topped 41 percent, topping a number of other business sectors. Perspective: As Cohen notes, more than 85 percent of ExxonMobil’s shareholders live in the U.S. Stock ownership includes individuals, retirement and public pension funds. The company’s ownership no doubt mirrors the results of this Sonecon consulting firm study that found nearly 50 percent of all oil and natural gas industry corporate shares are held by public and private pension and retirement funds, including 401(k)s, and IRAs. Individual investors own 20 percent, while financial institutions and asset management companies own 27 percent. That's 97 percent. Less than 3 percent is owned by corporate officers and board members. More on who owns “Big Oil” here.

Bottom line: ExxonMobil works hard for its money, as do other oil and natural gas companies, an industry that supports 9.2 million jobs and pays more than $86 million a day to the U.S. Treasury in taxes, rents and royalties. They’re willing to do more and could, with a set of pro-energy development policies that could create 1 million new jobs by 2018 and $800 billion in additional government revenue by 2030. 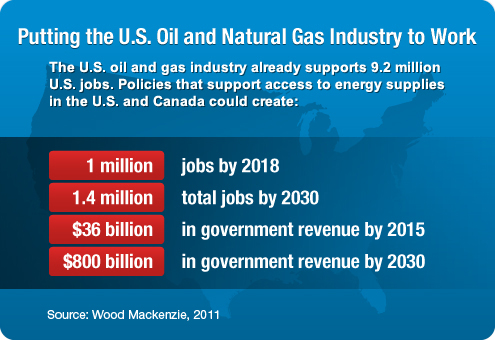