“The fact is, oil is bought and sold in a world market. And just like last year, the biggest thing that’s causing the price of oil to rise right now is instability in the Middle East.”

This important acknowledgement – echoed by Federal Reserve Chairman Ben Bernanke – accurately depicts the reality that crude oil is a global commodity whose pricing is affected by global events. Keep that in mind as we continue.

“The truth is that there is no silver bullet to address rising gas prices in the short term, but there are steps we can take to ensure the American people don’t fall victim to skyrocketing gas prices over the long term.”

History suggests that just as global crude markets are affected by unrest and uncertainty that could restrict supply, they also can be affected by developments that expand supply. That’s what happened in the summer of 2008: 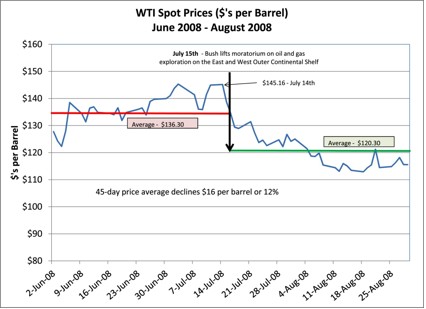 So, yes, supply matters – even the prospect of increased supply can have impact. So then the question is: What can the United States do to have more effect over crude oil supply, which, as nearly everyone agrees, is key to what happens at the pump?

We could approve the Keystone XL pipeline, which would bring upwards of 800,000 barrels of oil per day from Canada. We could endorse a federal offshore drilling plan that actually includes new areas for development, to increase domestic supply. We could open access on federal lands that currently are off limits. Studies indicate a tiny piece of the vast Arctic National Wildlife Refuge (ANWR), for example, could deliver 1 million barrels or more per day.

Unfortunately, the administration has said no the Keystone XL, no to a more robust offshore drilling plan and no to fully developing our onshore resources in ANWR, the Rockies and other areas. While the administration says it’s for greater domestic oil and natural gas production, it’s actually doing little to foster that and in a number of cases is blocking it.

“Since 2008, U.S. oil and natural gas production has increased each year, while imports of foreign oil have decreased. In 2011, U.S. crude oil production reached its highest level in 8 years, increasing by an estimated 110,000 barrels per day over 2010 levels to 5.59 million barrels per day. U.S. natural gas production grew in 2011 – the largest year-over-year volumetric increase in history – and easily eclipsed the previous all-time production record set in 1973. Even if you fail to give the Obama Administration the credit it deserves in helping to expand this production, any notion that production has been blocked or slowed, doesn’t square with the facts.”

Actually, the notion that the administration has blocked or slowed oil and natural gas domestic production is well-supported by fact:

So, another question: If overall domestic production has increased while production on western federal lands and in the Gulf has decreased, what does that mean? It means the increases are coming from areas not under federal control – that domestic output is increasing despite the administration’s policies, not because of them.

“We believe an all-of-the-above approach doesn’t need to come at-any-cost. That is why just as we make available more than 75 percent of our potential offshore oil and gas resources, the Obama Administration continues to study the feasibility of exploration, development, and production in other areas.”

Here we have some statistical flim-flammery. While the administration has made available for development 75 percent of federal offshore resources that meet the government’s definition of undiscovered but technically recoverable resources, these areas only account for 13 percent of the United States’ total offshore acreage. That’s how a 75 turns into an “F” on development.

“As you can see, the claims and the facts just don’t add up.”

The White House’s problem is the facts do add up. We’re looking at a 21 percent decline in Gulf production and a trajectory on federal lands that’s heading down. It’s an administration that says one thing on energy and does something else – sending mixed messages to Americans and global energy markets.