Yesterday President Obama gave a campaign speech centered around energy policy.  In it he said:

“There’s a problem with a strategy that only relies on drilling and that is, America uses more than 20 percent of the world’s oil.  If we drilled every square inch of this country -- so we went to your house and we went to the National Mall and we put up those rigs everywhere -- we’d still have only 2 percent of the world’s known oil reserves.  Let’s say we miss something -- maybe it’s 3 percent instead of two.  We’re using 20; we have two.  Now, you don’t need to be getting an excellent education at Prince George’s Community College to know that we’ve got a math problem here.  I help out Sasha occasionally with her math homework and I know that if you’ve got two and you’ve got 20, there’s a gap.  (Laughter.)  There’s a gap, right?”

No actually, the president needs to go back to school here, there isn’t a gap, because he is talking about “reserves” when the measurement that matters is “resources.” In simple terms, the president is pointing out the oil we have in our “checking account” while ignoring the larger amounts available in our “savings account” and overlooking our ability to deposit more oil in to those accounts in the future – more on that here.  Also, who exactly is calling for a strategy that “only relies on drilling?”  Not us and not any and not any of the presidential candidates.

No actually, we could have a 100 percent secure supply of liquid fuels by 2024 with the right policies in place, instead we have had three years worth of delays and obstructions when it comes to oil and natural gas development in the United States.

The Washington Post reported earlier this week that: “…because a series of crises has shaved oil production or boosted demand worldwide. Together they add up to a difference of about 1 million barrels a day in the global oil balance.”  Right now the U.S. is down 530,000 barrels a day in the Gulf, has delayed 1 million barrels of oil a day from ANWR for decades, and continues to block Canadian oil from the market.  So no, we aren’t helpless, we just aren’t helping ourselves.

Absolutely, and America’s oil and natural gas companies get this because they are first and foremost, energy companies.  In fact, 1 of every 5 dollars spent on renewables in 2000-2010 came from the oil and gas industry.  But as we work on new fuels it is important to keep in mind that the Energy Information Administration projects that in 2035 the United States will continue to meet over 56 percentof its demand through oil and gas – even with significant gains in efficiency and growth of alternatives.  Our current policies put our oil supply like this in the future. 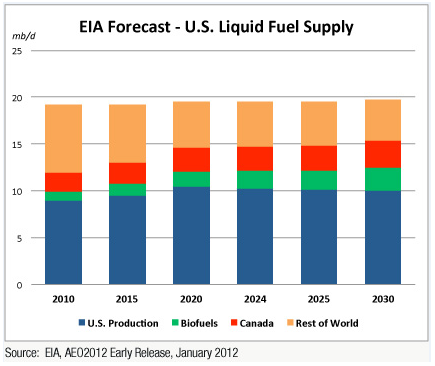 When with expanded domestic production and without sacrificing any environmental protections we could look like this: 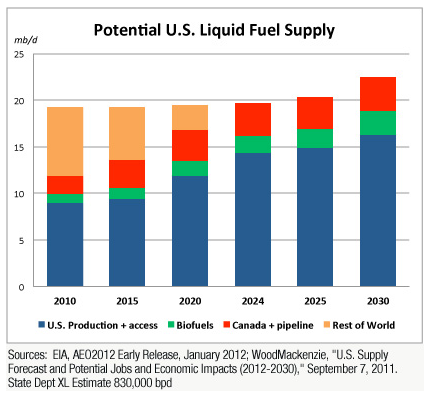 But instead of forward looking policies we get polemics:

Actually the oil industry receives no subsidies.  Here is chart* from EIA data: And the industry does not get tax credits (which reduce taxes dollar for dollar) or grants from the government.  They get tax deductions for business investments that will generate tax revenues in the future.  Unlike the case of credits or grants, the government will still be paid the full amount of tax owed on our operations.  Which means the taxpayer is getting every dollar they are owed.  What the president is proposing to do is to front load the tax collection, so any increases in current collections come at the expense of future taxpayers.

Oil and natural gas, according the governments’ own energy experts will be a large part of our energy future:

And our industry is all about American jobs, American ingenuity, American technology, American science, American-made energy, American efficiency and American productivity.  We do have a choice.  Have a look:

*You will notice on the chart a tiny sliver of four million dollars a year for natural gas. This credit refers to the “The Tax Credit and Deduction for Clean-Fuel, Alternative Fuel, and Electric Vehicles” which is a credit for individual consumers not the industry.