Job Creation and the Effects of Regulation

A follow-up to our follow-up on a Washington Post article that dismissed the effects of increased U.S. oil production on global crude oil markets. The story also took shots at the oil and natural gas industry’s ability to create jobs, as well as industry assertions about the potential effect of a new gasoline standard on refineries.

Let’s start with jobs. A Wood Mackenzie study released last fall said that with the right policies the oil and natural gas industry could create 1.4 million new jobs by 2030. Here’s what the job-creation growth looks like in a chart from that study: 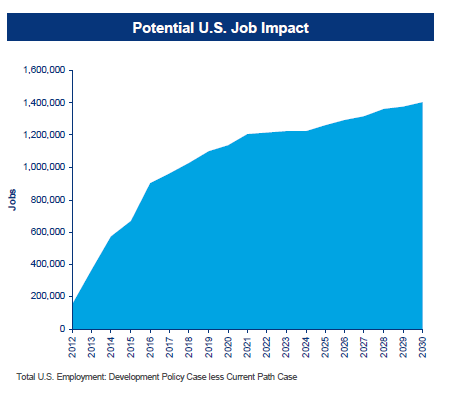 As it has done in previous articles, the Post suggested the projection isn’t valid because it includes direct, indirect and “induced” jobs – “everything from day-care workers to valets to rocket scientists.” We discussed that here and here. Kyle Isakower, API vice president for policy analysis:

“Estimates include induced economic benefits, as do the administration and its supporters’ estimates of green jobs created by the stimulus package. Including estimates of induced employment effects is a common practice in economic modeling. Increased economic activity in one sector provides more income to the economy that will have a ripple effect in other sectors.”

“Increased oil and gas exploration requires more steel for well casings. More steel means more steel foundry workers. As the steel mill expands and hires workers, those workers’ incomes increase and they spend more on other goods and services – housing, cars, food, etc. So when a new sandwich shop opens up across the street from the steel mill, those workers hold real jobs that would not exist without the increase in oil and gas development. I doubt any policymaker wants to tell any of these people that their jobs aren’t real, or that they don’t matter.”

This isn’t theory. It’s happening in states including North Dakota, Pennsylvania, Texas and Ohio, where oil and natural gas development is creating boom conditions in state and regional economies.

Now, as for the potential connection between increased regulation and refinery closures, the Post wrote:

Isakower said the Baker & O’Brien findings changed because EPA, which originally was considering lower sulfur and gasoline volatility (or RVP) requirements – leading to the 12 to 15 cents per gallon estimate of increased production costs – later decided it would not include an RVP reduction:

“We asked Baker & O’Brien to revise their study to estimate increased costs for the lower sulfur requirement alone, which resulted in the 6 to 9 cents estimate. Given EPA’s lack of transparency in the early stages of this rulemaking, and their change in regulatory plans, the differences in Baker & O’Brien’s estimates are to be expected.”

“(His) testimony that the costs for gasoline production would only increase 2.1 cents per gallon simply  averaged Baker & O’Brien’s cost estimate across all refineries. However, the Baker & O’Brien study estimates the marginal cost for those refineries that must upgrade to meet the new requirements, so his analysis is not directly comparable to the Baker & O’Brien marginal cost estimate. Refiners compete with one another – those that do not have to upgrade will not share in the cost of the upgrades for the facilities that do, as Schink’s testimony suggests.”