Make TAPS the Gift That Keeps On Giving

Worth reading is U.S. Sen. Lisa Murkowski’s op-ed piece in the Juneau Empire, marking the 35th birthday of the Trans-Alaska Oil Pipeline System, or TAPS.

The Alaska Republican knows something about oil. She represents a huge energy state and would likely head the Senate Energy and Natural Resources Committee if the GOP emerges from this fall’s elections with a majority. She depicts TAPS as more than a conduit for crude from Alaska’s North Slope. It’s an economic pipeline as well – for the state and the rest of the country. Key facts:

“Oil wealth has paid for improving our roads, water and sewer systems, building parks, renewing our cities, and improving life in our most remote villages. The riches that Alaskans have extracted from under the North Slope have also funded our schools, and helped bring our health care system into the 21st century.”

The pipeline’s birthday is an excellent time to think about its future. Murkowski writes that at its zenith, TAPS carried 2 million barrels of oil per day. Now the daily flow is only about a quarter of that. Alaska has slipped behind North Dakota to No. 3 on the list of top oil-producing states (behind Texas). Here’s a chart from Gov. Sean Parnell’s office showing North Slope production decline, which has decreased TAPS’ flow: 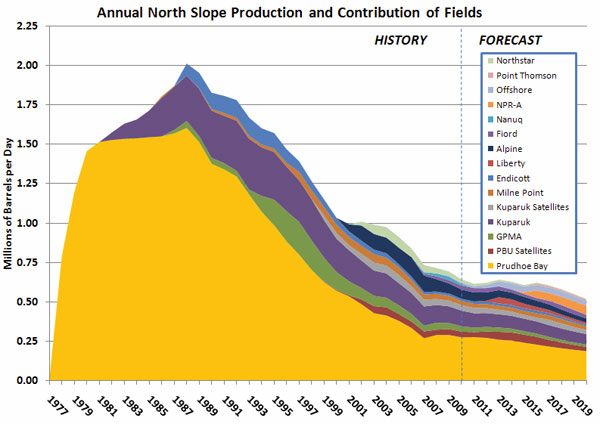 There are risks with reduced pipeline flow. According to the governor’s office, at lower flow levels it takes longer for oil to go through the pipeline, and at lower temperatures ice forms inside that can cause damage. Murkowski:

“Without new oil production, throughput in the pipeline could fall enough to threaten its future viability. Shutting down the pipeline would mean closing up shop on the North Slope. Alaska’s oil — like its massive natural gas reserves today — would be stranded with no way to market, leaving the state scrambling to replace the 85 percent of its annual revenue that today comes from oil.”

There’s a relatively simple solution: Produce more domestic crude oil to send through TAPS. The oil is there – offshore in the Beaufort Sea and the Chukchi Sea (where Shell hopes to sink exploratory wells this summer) and in the Arctic National Wildlife Refuge (ANWR), which Murkowski writes is the “largest single prospective onshore source for conventional oil in North America.” Some estimate ANWR could produce 1 million barrels of oil per day, which by itself would solve the under-capacity situation with TAPS while significantly boosting our country’s oil output.

The problem is policy. ANWR continues to be held off limits by Washington, and development of Alaska’s offshore areas has been slow in coming – again, chiefly because the federal government has been slow granting approvals. Murkowski:

“The federally owned lands and waters to the east, west and north of Prudhoe Bay hold tremendous resources, but access has been slowed by an administration more interested in designating new wilderness than shoring up Alaska’s economy.”

We need policies that create sustained and predictable access to oil and natural gas on federal lands – in ANWR and elsewhere (see map below). Access = energy development, which will mean job creation, economic growth and a more secure energy future. And a great birthday present for TAPS.