Listen to the 70 Percent on Energy

Taking a different look at this week’s Harris Interactive energy survey, to underscore the point that the benefits of increased domestic oil and natural gas development – more energy, more jobs, more revenue for government – hinge on the ability to make them happen.

Below are pie charts showing the opinion spread on three key questions in Harris’ survey of registered voters: 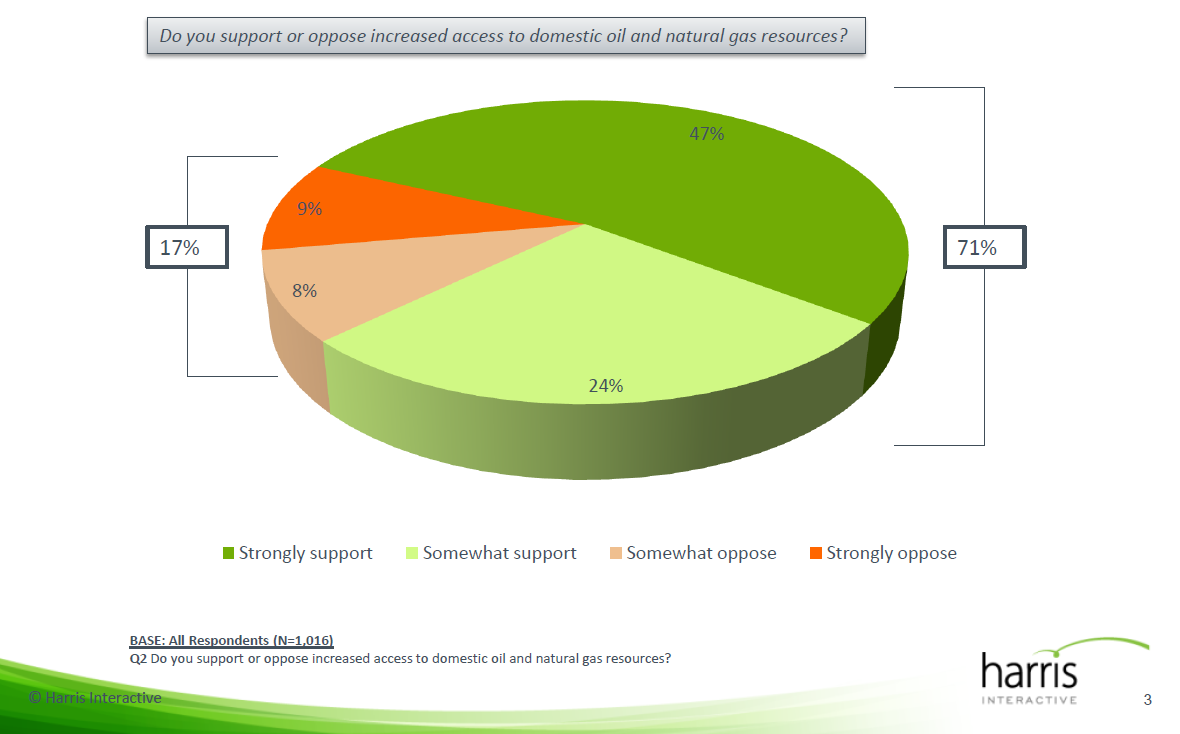 In the context of the current debate over our energy path, here’s what’s remarkable: Each of these is a 70-20 issue. “Strong” opposition to increased access to domestic oil and natural gas? 9 percent. To more offshore energy development? 13 percent. To the Keystone XL? 12 percent.

Bottom line: These are not toss-up questions. In the eyes of the American people increased access, offshore development and the Keystone XL are slam-dunks.

While minority viewpoints are heard and respected in this country, the 20 percent shouldn’t hold sway over the 70 percent. Bernard Weinstein of Southern Methodist University’s Maguire Energy Institute:

"… though America is 'energy rich,' we behave as though we're 'energy poor.' The Obama administration pays lip service to an 'all of the above' energy strategy, but in practice it remains hostage to the 'anti-carbon, anti-nuclear' environmentalists who aren't swayed by the fact that natural gas emits 50 percent less greenhouse gas than coal and that nuclear energy has a zero carbon footprint. They remain convinced that if they can kill the Keystone XL pipeline they'll be able to stymie development of the Alberta oil sands. These true believers continue to argue that America can provide for all of its future energy needs through a combination of renewables, efficiency, and conservation. This is sheer nonsense. We will never have bipartisan support for a sensible, comprehensive domestic energy policy until realism and fact can supersede ideology and fiction."

The argument here is for taking the right approach to energy – a true all-of-the-above-and-below strategy – that pursues all sources without overlooking the energy foundation of our economy and way of life: oil and natural gas. It means the right policies and a regulatory and permitting system that doesn’t unnecessarily hinder or block investment and development. It means paying attention to the 70 percent and getting to work. API President and CEO Jack Gerard:

“Talk is cheap. Americans are ready for political leaders who take action to deliver on the promise of domestic energy production.”