Energy as Election Mover and Shaker

"Now the presidential election will be conducted against a different energy backdrop. Discoveries of shale deposits and the rise of new oil technologies have reshaped the U.S. energy marketplace. Big increases in renewable energy as well as domestic oil and natural gas production -- combined with the declining market share of coal -- change the terms of the old production-versus-conservation debate."

"Accompanying the boom in domestic oil and gas production has been a huge boom in 'shovel-ready' jobs for that sector...Over just the last two years, employment in the oil and gas industry for drilling-related jobs has increased by more than 23% to 195,500 jobs in July, which is the highest level for those jobs since early 1988, more than 24 years ago. America’s booming energy sector has been creating an average of 85 new jobs every business day for the last year, and those are just the direct jobs for oil and gas extraction, and doesn’t count all of the indirect jobs created throughout the supply chains for oil and gas."

"…the economic benefits to the U.S. economy from the booming domestic energy production, especially from the surging output of unconventional shale gas and oil, are approaching $1 billion per day. With all of the concerns about the sub-par growth of the overall economy during the last three years of recovery (2.2% average real GDP growth since June 2009), imagine what the growth rate of the economy would be if we didn’t have the booming oil and gas industry that is bringing energy prosperity and shovel-ready jobs to states like North Dakota, Texas and Pennsylvania." 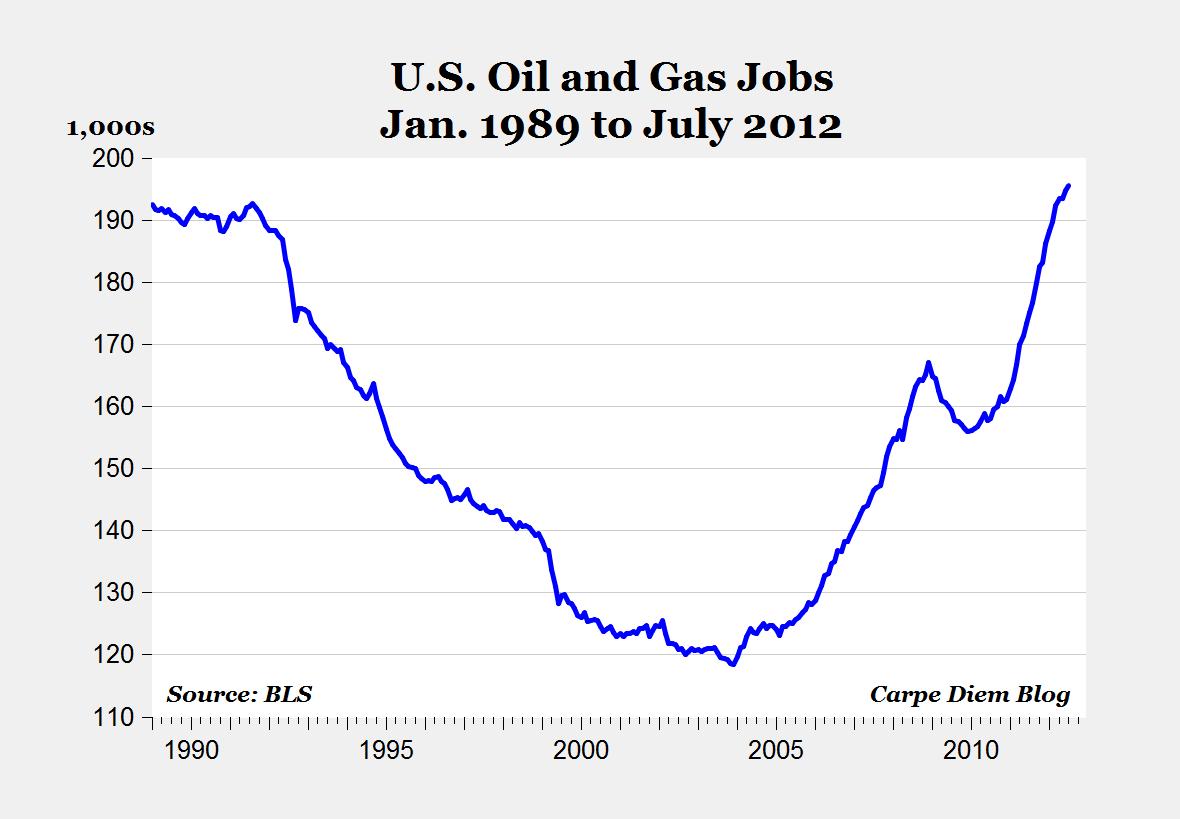 Bottom line: There’s an energy/jobs bandwagon that’s capturing candidates’ attention, which is understandable. American voters recognize it as well. A recent Harris Interactive survey of registered voters showed 7 in 10 favor increased access to domestic oil and natural gas resources – 9 in 10 believing increased access could mean more U.S. jobs. Increased access includes sensible development of resources off both coasts and on public lands, such as the National Petroleum Reserve-Alaska, and construction of the Keystone XL pipeline, to bring crude oil from neighbor and ally Canada.

Who is helped by the energy boom, politically speaking? Easy: Those who back real policies and plans that support domestic oil and natural gas development. Both candidates have talked a lot about energy, including the president’s regular promotion of an all-of-the-above approach. But increased oil and natural gas production has largely occurred on private or state lands – despite administration policies, not because of them. Still, energy-related growth might help the president in producing states like Pennsylvania and Ohio. Back to the Businessweek piece:

Today, the energy industry is one of the main engines of job growth and the U.S. is the closest it has been in almost 20 years to meeting its own needs. Yet the transformation – driven by a surge in oil and natural gas production – isn’t primarily green and has little connection to the president’s plans. 'We’re moving to energy independence by accident,” said Philip Verleger, who directed the U.S. Treasury office of energy policy under President Jimmy Carter and is now an industry consultant.' Energy policy had nothing to do with it.'…Representative Bill Johnson, an Ohio Republican whose district is home to many of the new wells being drilled, said Obama doesn’t deserve praise for the energy boom. 'You go to a football game, you don’t get credit for throwing a touchdown pass,' Johnson said. 'The quarterback does.'"

That’s why this year’s Vote4Energy campaign is key, supplying facts upon which Americans can decide and energy-based vote this fall.