The EIA is out with new energy statistics, which for those of us who do this sort of thing is basically a holiday* in itself. And it turns out there are plenty of gifts for America, too – first and foremost the incredible wealth of oil and natural gas opened up by horizontal drilling and hydraulic fracturing. The natural gas part gets all the attention, and we’ll talk about that in another post (or hundred), but it’s important not to forget the oil, because, oh the oil!

As recently as 2011, EIA didn’t even bother breaking out “tight oil” as a separate line item on its “Oil and Gas Supply” chart. But with advances in safe and responsible development of oil from shale – a process dependent on fracking – tight oil charted in a big way in 2012. With the 2013 statistical release it’s easy to understand why.  Supply in this area went from 820,000 barrels a day in 2010 to 1.2 million barrels a day in 2011 to an estimated 2 million barrels a day in 2012 – and is projected to grow.  All told EIA estimates that more than 35 percent of the oil we produce between now and 2040 will be tight oil – again, thanks to fracking.

But what does that really mean – 35 percent? Well, it means we won’t have to import that oil. That’s good from a security standpoint, but it’s also very, very good economics.  A quick look at another line on the chart – EIA’s estimated wellhead price – will tell you why.  Between 2013 and 2040 tight oil will represent energy sales of more than $2.9 trillion – that’s “T” as in trillion, dollars as in dollars – not going out of the country and instead staying right here in America. And along with it security, jobs, government revenues and economic opportunity – often in parts of the country that haven’t had much of any of these in a long, long time. 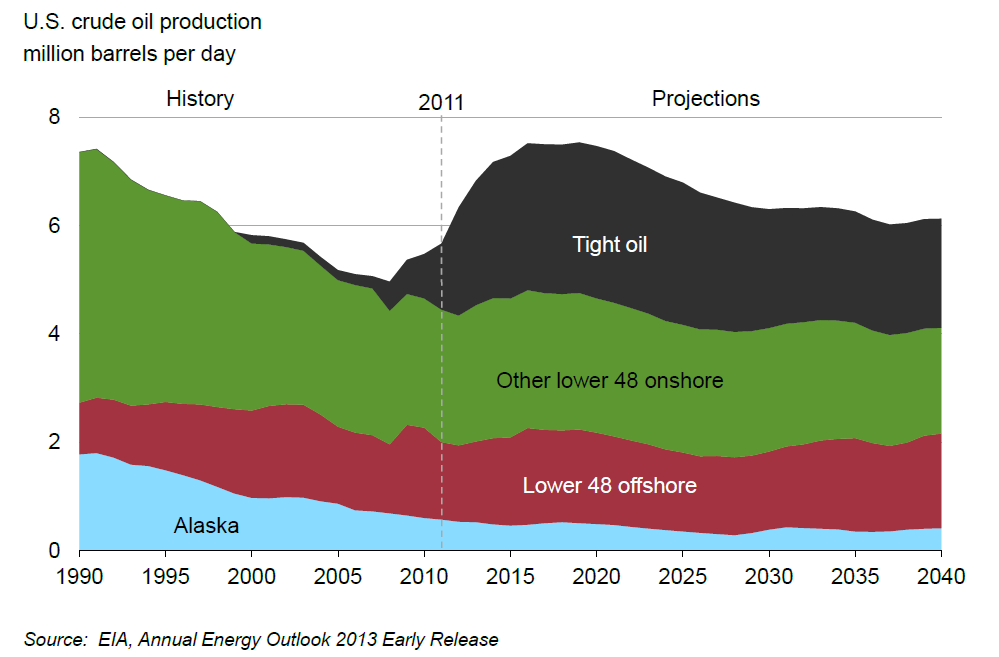 *This year give the gift of data!