A recent study for the Energy Department – detailing broad economic benefits from the export of liquefied natural gas (LNG) – is good news on a number of fronts: for trade, job creation and economic growth stemming from increased energy development. Recapping, the NERA study of more than a dozen LNG export scenarios found significant benefits to the U.S. economy:

"Across all these scenarios, the U.S. was projected to gain net economic benefits from allowing LNG exports. Moreover, for every one of the market scenarios examined, net economic benefits increased as the level of LNG exports increased. … Exports of natural gas will improve the U.S. balance of trade and result in a wealth transfer into the U.S. Construction of the liquefaction facilities to produce LNG will require capital investment. If this capital originates from sources outside the U.S., it will represent another form of wealth transfer into the U.S. Households will benefit from the additional wealth transferred into the U.S. If they, or their pensions, hold stock in natural gas producers, they will benefit from the increase in the value of their investment."

"GDP also increases as a result of LNG exports. … Under the Reference case, GDP increases could range from $5 billion to $20 billion. Under the High Shale case, GDP in 2020 could increase by $10 billion to $47 billion. … Every scenario shows improvement in GDP over the No-Exports cases …"

Here’s NERA’s chart showing the projected change in GDP dollars for each of the different export scenarios it examined: 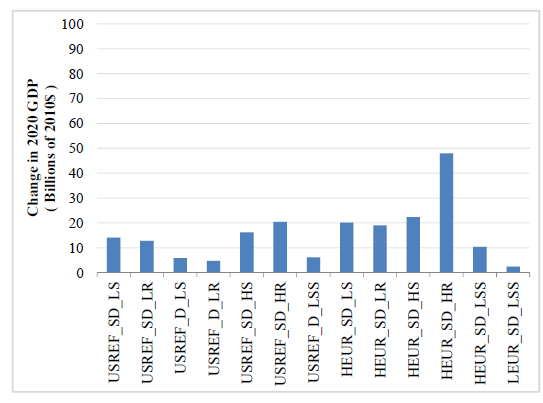 We’re talking about an improved trade balance – U.S. products sold vs. foreign products bought – increased investment in this country to meet the demand of new markets and a boost to GDP, our economy. All good, right? Apparently not to everyone.

"'It makes no sense,' said Stabenow, who represents Michigan … 'We own this,' Stabenow said of bountiful U.S. natural gas supplies. 'Why in the world would we create the situation' where employment goes down and prices go up, she told reporters"

Sen. Ron Wyden, incoming chairman of the Senate Energy and Natural Resources Committee, in an interview with Energy Guardian:

“What concerns me is, if you just say, fine, let's export a tremendous amount, by the law of supply and demand, that can bump up prices for consumers and businesses here at home, while lowering prices for people around the world. If the world price is substantially higher, four or five times higher, and you settle in the middle, doesn't that harm American competitiveness and American manufacturing?”

Then there’s U.S. Rep. Edward Markey of Massachusetts, who says NERA didn’t do its study properly. He wants the analysis reworked – presumably in pursuit of a different outcome.

Setting aside Markey’s “shoot-the-messenger” message – attacking the study’s methodology because he disagrees with its conclusions – these concerns could sound credible, but only if you suspend belief in fundamental economics: That when the United States trades with global partners, when the trade balance shifts in America’s favor, America wins. Basically, that’s what NERA’s study found. Selling liquefied natural gas abroad will tend to create a larger market for U.S. natural gas, generating domestic industry growth, hiring and investment while spinning off benefits to associated and supporting sectors. That’s what others are pointing out.

"...we are persuaded by the report’s core finding that the benefits of selling gas to other countries would more than offset the modestly negative impact of higher prices for domestic users of the fuel.  … Greater gas exports could also factor into American foreign policy. By offering countries like India and China access to cheap American gas, Washington could make it more palatable for them to join in supporting sanctions against Iran, for instance. And it could give the United States new leverage in trade negotiations."

"Usually, opponents of freer trade argue that Americans shouldn’t be buying so many cheap products from abroad, sending their cash overseas. But when it comes to exporting some of this nation’s abundant supplies of natural gas, those who oppose opening up to the world turn that logic on its head — arguing, strangely, that Americans shouldn’t be trying to sell this particular product to other nations, bringing money into the country in the process. Both arguments are unconvincing, and for the same reason: When countries can buy and sell to each other, their economies do what they are best at, producing more with less and driving economic growth."

And one by the Wall Street Journal:

"By (some opponents’) logic, the U.S. should never export anything because foreign buyers might bid up the price. Thus Iowa farmers should limit their corn sales to the 50 states because Chinese demand has raised corn prices. Try selling that one in Des Moines. Mr. Markey is arguing for economic autarky, which didn't work in the Middle Ages, much less in a modern global economy in which trade has lifted tens of millions out of poverty. In the real world, growing demand for a product leads to rising prices and then an increase in supply. If world demand rises for LNG, natural gas prices will rise and U.S. producers will look for more gas. … As exports rise, so will income for U.S. producers and workers."

In an op-ed for the New York Post, George Mason University economics Professor Donald J. Boudreaux writes that critics are incorrect about LNG exports leading to significantly higher domestic energy prices. Boudreaux cites economic analyses to the contrary, including a Deloitte projection that LNG exports could cause a 20-year domestic price increase of just 1.7 percent. Boudreaux:

"This isn’t surprising. With their market spanning the globe rather than merely the United States, American producers would build larger-scale and more efficient production facilities, as well as invest more in exploration and cutting-edge research. These 'supply-side' effects would push gas prices downward. … The argument against natural-gas exports is also economically backward. A nation prospers through international trade precisely by exporting those goods and services that it can produce at relatively low cost."

Obviously, the public policy discussion surrounding LNG exports has a ways to go. A lively, informed debate is worth the effort. We stress informed. For some reason, when discussion of trade turns to energy commodities, there’s some tendency to forget the proven benefits of free trade and global markets. That shouldn’t happen here. All signs indicate U.S. natural gas is a desired commodity around the world, with the above described benefits accruing if we allow its export as dictated by global demand. Now’s not the time to keep this valuable American asset buried in the ground.