The numbers themselves are stop-and-stare huge:

We bring these numbers up because as Washington wrestles with its budget problems, America’s oil and natural gas companies can be the solution – adding jobs, economic value and energy to drive the long-term economic and general prosperity of our country. So, what are decision-makers waiting for?

Good question. With the right policies we can redeem a winning lottery ticket – one based on ample U.S. energy resources, outlined in a number of recent studies depicting the game-changing vastness of this country’s oil and natural gas reserves.

Pro-growth policies on new drilling, onshore and offshore, common-sense regulation and approaches that will foster an optimal investment climate can put America’s energy wealth to work, creating a sustainable path where America is creating jobs, revitalizing key economic sectors like manufacturing and chemicals, helping governments meet their obligations and becoming more secure in the world.

This is the right choice for our country, one that’s consistent with the historic and successful role private-sector growth has played in building America’s economy and our modern way of life. Hindering growth – by taking a self-limiting approach to the oil and natural gas we have, by binding up potential development in miles of red tape, by chilling private investment – is the wrong path.

Let’s close with two charts, favorites of ours because they vividly show what pro-growth energy policies could do – for job creation: And for generating revenues for government: 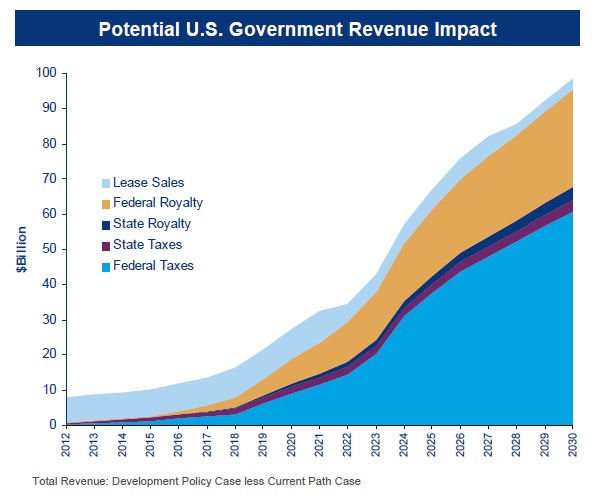 America’s oil and natural gas industry supports 9.2 million jobs and is investing in America – $1.3 billion a day in 2010 – betting on an energy-rich nation with the power to shape its future. If it chooses.