There’s an important message in the pair of charts below. First, a bar graph showing the world’s top natural gas-producing countries in 2011, drawn from a world statistical review by BP: 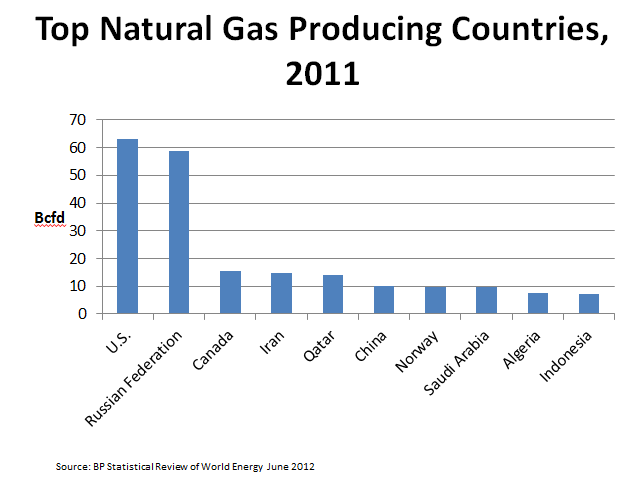 And the world leader is … U.S.!  In 2011, the United States produced more than 60 billion cubic feet per day (bdfd) of natural gas, just ahead of Russia and more than three times as much as No. 3 Canada. Now the second chart: 
So, a third question: Why? Why isn’t the world’s leading producer of natural gas also its leading exporter – or at least among the world’s top exporters? The answer is nearly as simple as the first two: Because so far we’re not taking full advantage of our resources by recognizing the export opportunities out there and working to supply them.


Thanks in large part to shale reserves, hydraulic fracturing and horizontal drilling the U.S. has the natural gas to support both domestic demand and overseas markets – the best of both worlds. Here at home affordable natural gas is benefiting consumers and manufacturers with lower costs. It’s the feedstock for important sectors like the chemical industry. It has helped lower U.S. emissions of CO2 to their lowest point in 20 years.

We also have the natural gas to supply willing buyers abroad. Trading any U.S. commodity is good for our economy. It’s why we export wheat, automobiles, computer parts and other items. A recent study for the Energy Department found that the export of liquefied natural gas would boost U.S. gross domestic product. LNG exports would help drive domestic production, creating more U.S. jobs while spurring the broader economy here.


The choice is ours. Washington policymakers are considering applications to build LNG export facilities. Yet, the global LNG market is likely to get more competitive. There are more LNG export facilities being discussed around the world right now than could be supported by world LNG demand. The question is whether the U.S. will be a major player in that market, perhaps the leader, or cede that role – and the benefits – to others. The choice is ours.