Keystone XL: Safe for Our Country

The Keystone XL pipeline is squarely in President Obama’s court. He should approve the full project – for the jobs, economic lift and strengthened energy security this shovel-ready project would provide for our country. (Photo below by Joe Wertz/StateImpact Oklahoma) There’s no good reason to continue blocking the Keystone XL. Concerns about the environment? Answered. The State Department’s recent review:

Note that State’s favorable environmental assessment includes the pipeline’s operation. It, too, will be safe, as API underscored in its official comments on State’s review:

(Pipeline builder) TransCanada will also follow all requirements of (federal regulations) applicable to facility response plans and safety requirements for hazardous liquids pipelines – plus 57 special conditions for operations and maintenance. As mentioned in the draft (State Department review), the proposed project will be state of the art in materials, coating, construction practices, and monitoring systems. When coupled with the operations and maintenance practices described and the extra 57 special permit conditions that TransCanada has agreed to follow, the pipeline should be one of the safest ever built and operated …

Before reviewing the safety specifics of the Keystone XL itself, some points about pipelines in general: 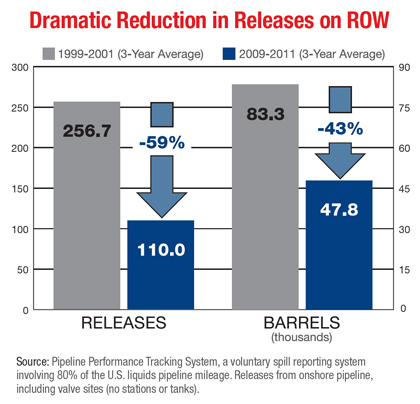 Pipelines are one of the safest and most cost-effective means to transport the extraordinary volumes of natural gas and hazardous liquid products that fuel our economy. To move the volume of even a modest pipeline, it would take a constant line of tanker trucks, about 750 per day, loading up and moving out every two minutes, 24 hours a day, seven days a week. The railroad-equivalent of this single pipeline would be a train of seventy-five 2,000-barrel tank rail cars every day.

API President and CEO Jack Gerard on the record of pipeline safety in this country:

“Those are reassuring numbers and reason for each of us, as we consider the benefits of oil and natural gas products – reliable, energy-intensive fuels and countless products that make modern, healthy living possible – to accept the challenge of managing limited risks associated with developing these energy resources.”

A quick rundown of the Keystone XL’s safety features, including the 57 special conditions it has worked out with PHMSA officials:

The Keystone XL will deliver about 830,000 barrels of oil per day to America’s Gulf Coast refineries – about 25 percent of that from the U.S. Bakken region and the rest from Canada’s oil sands. Contrary to misinformation spread by oil sands/pipeline opponents, the Canadian crude is not riskier to the pipeline’s integrity than other crudes. API:

The primary focus of pipeline operators is to keep oil in the pipe.  … In examining liquid pipeline incident data collected by PHMSA from 2002 through mid-2012, not one release from pipelines moving any Canadian crude was caused by internal corrosion.

The Keystone XL has been delayed long enough. During more than four years of federal review, questions have been raised and answered. The Keystone XL has passed all the tests. API’s Cindy Schild, senior downstream manager for oil sands:

“No pipeline has been analyzed as long and as thoroughly as the Keystone XL pipeline. It’s been under review for more than twice as long as it will take to build the entire project.”

President Obama should approve this safe, environmentally sound energy infrastructure project – for the jobs it would create, the boost it would give to our economy and for the oil that will support that economy as well as our modern way of life.