Today we look at New Mexico, continuing our series of posts that highlight the economic and jobs impact of energy in each of the 50 states. We started with Virginia, then Ohio, and Colorado. The energy impacts of the states individually combine to form energy’s national economic and jobs picture: 9.8 million jobs supported and $1.2 trillion in value added. 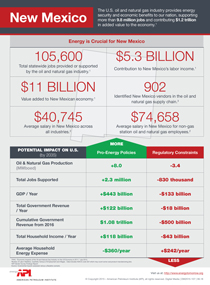 The topline numbers: 105,600 jobs supported statewide; according to PwC; $11 billion added to the state economy; $5.3 contributed to the state’s labor income. All are significant drivers for the state’s economy.

Among oil producing nations, New Mexico would rank 32nd in the world with an output of 332,000 barrels per day in 2014. The state’s rapid growth in shale production, unlocked by hydraulic fracturing and horizontal drilling, has helped the United States to take the top spot among global producers and places New Mexico eighth among all U.S. states for natural gas production. New Mexico isn’t just a national leader – it’s a global leader.

Page 2 of the document on the left highlights the potential economic losses created by proposed new ozone rules that could be the most expensive regulations ever imposed by the EPA. If implemented , these regulations could cost New Mexico more than 7,000 jobs and $1.6 billion in gross state product losses between 2017 and 2040.

Energy is critically important to New Mexico, serving as a key engine for the state economy – expanding job opportunities and offering the hope of prosperity to individual New Mexicans and their families.

The future benefits of energy for New Mexico– and the rest of the country – largely depend on national decisions on the country’s energy path. A new Wood Mackenzie study contrasts the benefits that a set of pro-development policies could have on energy supplies, jobs, the economy and American households with the likely negative effects on energy of regulatory constrained policies. The key comparisons are found on the first page of the linked document.