Vote For The Right Track – Vote4Energy 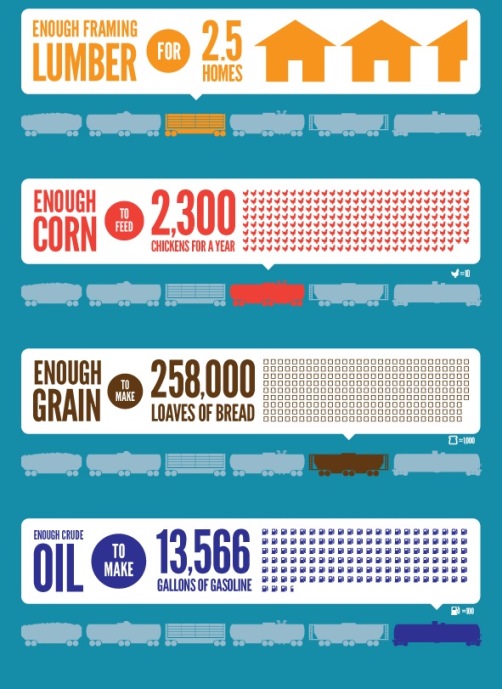 With a nod to the Association of American Railroads (AAR), here’s an infographic with some numbers to think about – perhaps the next time you’re at an at-grade railroad crossing with nothing better to do than count the freight cars as they rumble by.

Lumber for home construction, corn for chickens, grain for bread and crude oil for refining into gasoline – that’s a lot of stuff. But it just scratches the surface of the things moved from Point A to Point B every day via America’s railroads.

According to the Federal Railroad Administration (FRA), the U.S. freight rail network stretches 140,000 rail miles. It’s the arterial system of a $60 billion industry that deployed 25,000 locomotives and 374,000 freight cars in 2013 (last data year available), according to the U.S. Energy Department. This system accounted for more than 1.7 billion tons-originated of freight. It’s big. It has to be.

AAR says every single person in the United States requires the movement of 54 tons of freight every year – from apples to onions, I-beams to cinderblocks – and much, much more. When you think about those boxcars, hopper cars, flatbed cars and tank cars rolling by, you’d be hard-pressed to imagine a facet of the U.S. economy and our daily lives that isn’t facilitated by rail transportation. As FRA notes:

“A new automobile leaves the factory on a railcar, not a truck. A loaf of bread begins as grains shipped by rail to industrial bakeries and flour mills. A light bulb calls on a power plant to supply energy from coal, biofuels, or wind energy components shipped by rail. A television arrives on the west coast and speeds across the country by rail to an intermodal center where it travels by truck to its final destination.”

Rail intermodal refers to the transportation of shipping containers and truck trailers by rail. It’s cost-effective and environmentally friendly, offering service at competitive rates and reducing highway congestion in the process. In 2014, AAR says, North America’s railroads handled a record 17 million containers and trailers. The U.S. total in 2015 was 13.7 million units, a record for this country. A video on intermodal freight:

“Freight railroads move about 40 percent of the country’s intercity freight and play a vital role in the transportation of what American businesses make and what American consumers want in their personal and business lives every day. Freight railroads provide a vital link for our farmers, manufacturers and resource producers to the domestic and global marketplace – moving U.S. products to market anywhere in the country and, through ports to destinations around the globe.” Now, like so many other parts of day-to-day life in America, the railroad system that supplies Americans is built on a foundation of reliable energy. The vast majority of that energy is diesel, refined from crude oil. The Energy Department says the freight sector used 514.9 trillion Btu of diesel fuel in 2013. The passenger system makes wide use of electricity for locomotion, but that electricity is generated by primary fuels like coal and natural gas. Both the freight and passenger rail systems benefit from lower-cost energy produced by America’s ongoing energy revolution, a revolution that has seen the United States become the world’s leading oil and gas producer, lowering costs for industries, businesses, the transportation sector and consumers.

The freight rail system is one of innovation, transitioning from wood- and coal-fired steam engines like the kind silent film star Buster Keaton used for comedic props to modern locomotives (of which there are dozens of types), a number of them producing more than 10,000 horsepower. Modern innovation has resulted in greater energy efficiency, AAR’s Greenberg says:

Efficiency measures include retiring older engines, installing new idling reduction systems and installation of advanced computer software that can calculate the most fuel-efficient speed for a train over a given route. Greenberg:

“[Other] ways freight railroads have been able to generate greater efficiencies include … offering employee training and incentive programs to help locomotive engineers develop and implement best practices and improve awareness of fuel-efficient operations, expanding the use of distributed power, which is when locomotives are positioned in the middle of trains to reduce the total horsepower required for train movements, and improving rail lubrication to reduce rail friction.”

According to AAR, on average trains are four times more fuel efficient than trucks, moving a ton of freight about 480 miles per gallon of fuel.

There’s another intersection between railroads and energy: The rail system is a major link between production areas and refineries, moving 493,146 carloads or 357.5 million barrels of oil in 2014 – 11 percent of total U.S. production: A few words about the passenger rail system. Rail’s not just about moving goods, it’s also about moving good people. The 2015 Public Transportation Fact Book, shows that there are 97 rail transit systems in the U.S. that took 4.8 billion trips in 2013 (last full data year available), moving passengers over 32 billion miles in 2013. These trips consumed more than 100 million gallons of diesel fuel, and 6.6 billion kilowatt hours of electricity. And as passenger miles grow, the energy needed to cover them will grow, too. 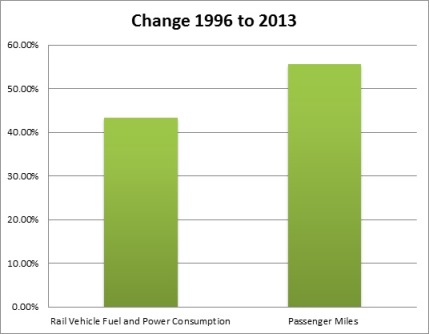 Even as efficiency improves: 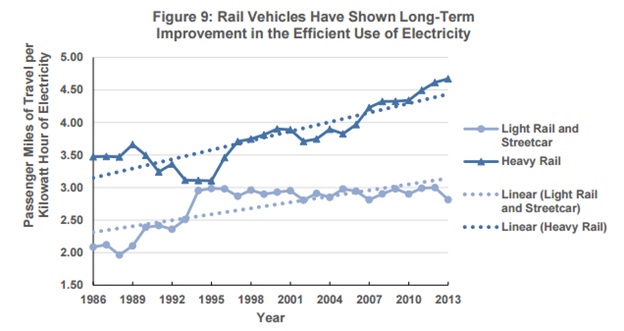 Whether it’s moving people or produce, the rails are humming. So, the next time you hear a train engine’s whistle , think about all of the goods or the people that train is delivering, making our lives better, and also the energy that makes those trains run.