Our daily existence depends on access to water – and we need it clean. For drinking. For cooking, bathing and recreation. For life itself.

Sometimes we take clean water for granted, but we really shouldn’t. Just ask folks who live in parts of the country that are arid 365 days a year or in places experiencing drought. Appreciation of our water resources prompts stewardship, environmental awareness and a basic commitment to clean up. So, to mark Earth Day 2016, let’s talk clean water.

Modern wastewater treatment facilities are the first responders in the transformation of used water – from urban and suburban runoff, agriculture and the daily needs of every man, woman and child – into water that’s usable again.

Enter energy. No one should be surprised that the process of wastewater treatment takes loads of energy. The Blue Plains Advanced Wastewater Treatment Plant that serves the District of Columbia and parts of Maryland and Northern Virginia, the third-largest plant of its kind in the world, is the largest single-source consumer of electricity in D.C., according to plant officials. As we’ve noted throughout this series, electricity generation is increasingly being fueled by clean-burning natural gas. The U.S. Energy Information Administration expects that this year, for the first time ever, natural gas will be the United States’ leading energy source for power generation. Bottom line: Energy is fundamental to clean water for all.

API colleague Jessica Pointer and I recently visited Blue Plains to see how a metropolitan wastewater treatment facility works. Blue Plains is situated on the Potomac River due south of downtown D.C., on the bank opposite Alexandria, Va. Here’s what the 153-acre complex looks like from the air: 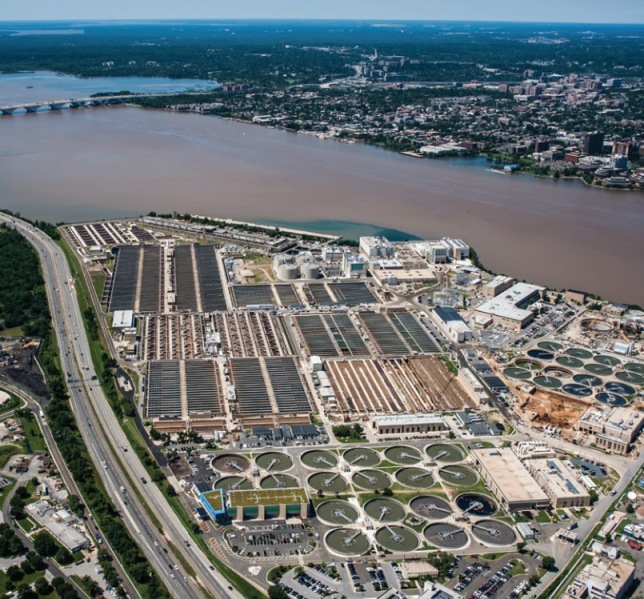 Some facts about Blue Plains: Our tour guide, DC Water’s Bipin Pathak, explains that the treatment process begins when wastewater arrives at the plant. A series of screens removes objects and large particles. A grit chamber takes out rocks and other non-degradables. The two-story building where this happens is filled nearly floor to ceiling with a series of metal contraptions behind guardrails that pull out all kinds of things that are waste but not to be processed. This stuff is loaded into trucks and hauled to a landfill.

Primary treatment occurs in a cone-shaped sedimentation tank that lets solid particles settle and fall out the bottom while wastewater flows outward, over a set of weirs, low barriers that pool the water behind them. A metal arm on the surface skims fats, oils and grease off the top that’s then taken to a landfill. From above the round, water in the concrete tanks appears still, like a little pond, but the water actually overflows the sides, through metal teeth and then down into a moat below.

Secondary treatment uses microbes to treat organic material like fats, sugars and short-chain carbon molecules. Microbes need oxygen and food. The wastewater contains the food; oxygen is pumped into tanks, and the microbes get to work. The tanks are round and concrete like the primary tanks, but the surface is frothy and bubbly, red-brown in color – and oh my, the aroma! You wouldn’t want to drop your cellphone in there. Once the microbes are done, they settle out at the bottom.

Blue Plains officials say this is where many wastewater treatment plants stop. At Blue Plains, advanced treatment processes are introduced to oxydize nitrogen from ammonia to nitrate, converting the nitrate to nitrogen gas that safely releases into the air. It includes multimedia filtration – running the treated plant flow through sand and anthracite before it’s disinfected and residual chlorine is removed. The final plant effluent after processing that goes into the Potomac looks like drinking water. “You guys see the nasty things out front,” Pathak says. “Now it’s pretty clean.” He smiles, fetches two beakers filled with clear water and challenges our tour group to figure out which one is treated plant water and which one is tap water, ready to sip. No one volunteers for a taste test.

That might be more than you wanted to know, but it’s important. Because, again, all of those processes – the pumping, the machinery, the processing systems and more – require energy. Now, the plant gains back some of the energy it consumes in a phase called thermal hydrolysis. This uses heat and pressure to prepare collected solids from other processes for feeding to microbes in digesters. They produce methane gas to fuel electricity-generating turbines. “We are feeding one bacteria to another bacteria,” Pathak says.

It’s a big, complicated process, all resting on a foundation: Your water and mine, cleaned with a big helping hand from energy.

Some photos that API's Jessica shot at Blue Plains 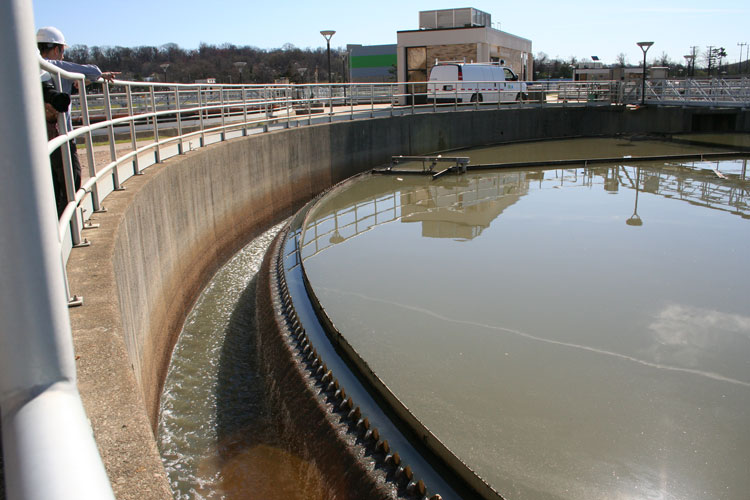 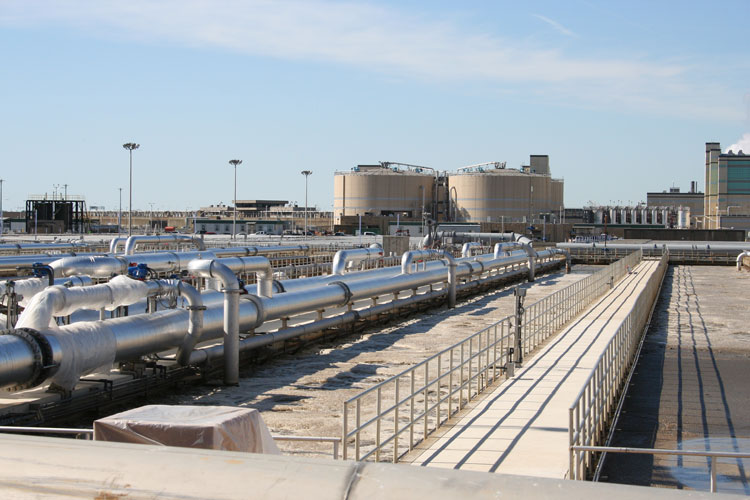 Secondary treatment tanks use microbes to break down organic material. 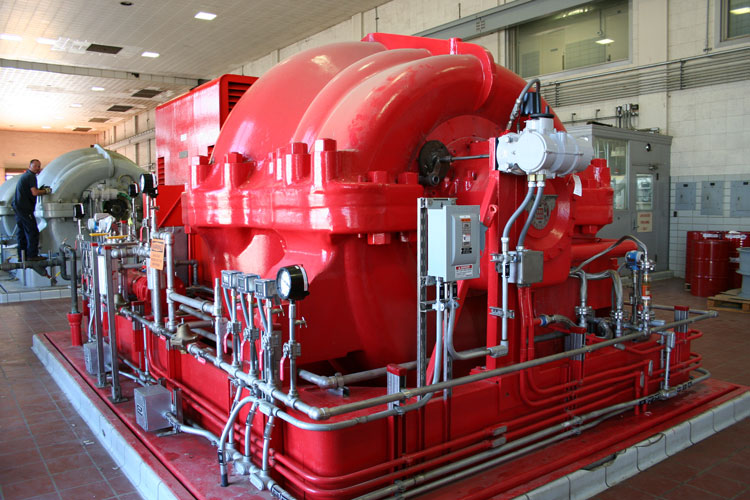 Blowers provide wind flow during the early stages of treatment. Catwalks allow DC Water employees to make their way around the plant. Chlorination/dechlorination tanks near the end of the process. 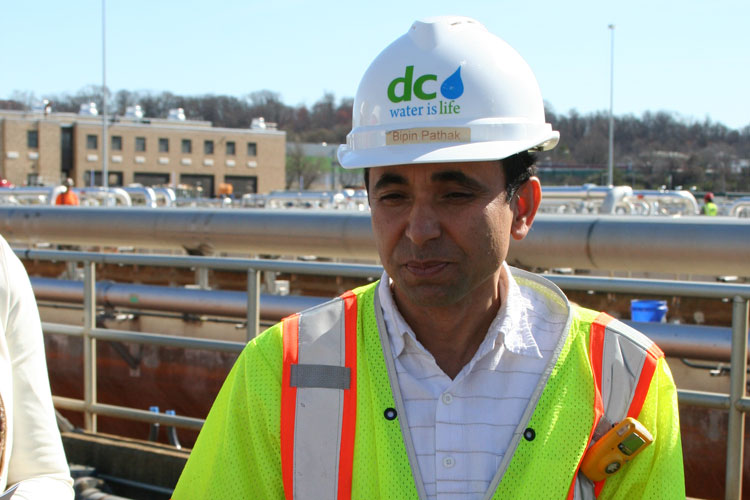