Energy is in just about everything we use and in nearly everything we do. Energy for the chemicals and component parts. Energy in manufacturing processes. Energy for mobility. Yet, because everyone is busy, there’s not a whole lot of time to reflect, and much gets taken for granted. That book you read – energy. The medical technology that keeps you healthy – energy. A night at a ballgame – energy. And more.

In our 2016 look at the energy that supports and powers modern living, the goal is to get more folks to pause and wonder: “Where did that come from?” And: “What makes that go?” In virtually every instance the answer is energy – oil, natural gas and things made from them. 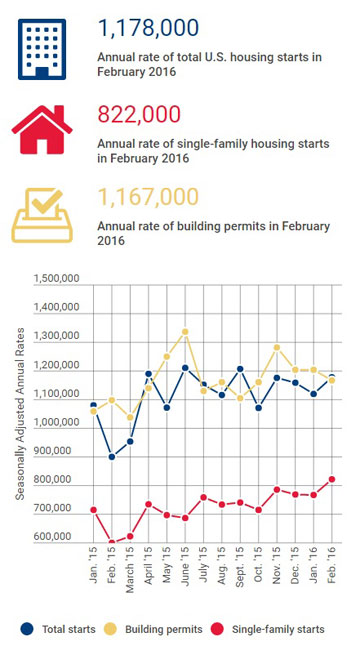 We depend on oil and gas because there’s nothing like them for energy content, portability and adaptability. They’re in chemicals and products all around us: plastics, clothing, medicines and more. Leave them in the ground? Only if you think you’d enjoy a world that’s colder, harsher and less healthy, a world that’s smaller because travel is greatly restricted – one in which millions are relegated to poverty, with near-zero opportunity to change their lives’ trajectory.

Today let’s focus on one of the basic necessities of life: shelter. According to Habitat for Humanity, 1.6 billion people worldwide live in substandard housing and 100 million are homeless. So, that roof over your head – what did it take to build that? First, some home-building basics.

The National Association of Home Builders (NAHB) says that in February the annual rate of single-family housing starts was 822,000. And that means employment for home builders. Carpenters, for example. According to the Bureau of Labor Statistics, 945,400 Americans were employed as carpenters in 2014 – a lot of them involved in residential construction. An NAHB study calculates that building the average single-family home supported 2.97 jobs and more than $110,000 in taxes in 2014. Framers, millworkers and cabinet makers, floor coverers.

All of these people work with materials made from or requiring energy. Consider just a few.

Lumber. Think about the energy that goes into growing and harvesting a tree, to make the lumber needed to frame a house. That’s energy for planting, fertilizing and nurturing and for the equipment. Here’s a look at planting:

When the tree is big enough then comes the logging. Not like this:

But like this – big, brawny machines that have replaced axes and manual two-man crosscut saws, even chainsaws:

This equipment is manufactured (think: energy) and needs fuel (think: more energy). The logs then have to be milled into framing studs and planking. It takes 600 pieces of lumber for a three-bedroom Habitat for Humanity dwelling. Obviously, more for the McMansion down the street. A modern sawmill like Weyerhauser’s Santiam sawmill in Lebanon, Ore., one of more than 200 sawmills in the U.S., produces 5.6 million cubic meters of sawn wood a year. Here’s Santiam at work:

Roofing. Most homes are roofed with asphalt shingles – either an organic or fiberglass mat base that’s saturated with an asphalt coating that makes them weather-resistant. Of course, asphalt is a byproduct of the crude oil refining process. They’re durable, lasting 20 years or more, and are far superior to thatch.

Siding (and flooring). According to the Census Bureau, vinyl (including vinyl-covered aluminum) was the most common exterior wall material used in homes started in 2014 (30 percent). Vinyl is made from ethylene, which comes from crude oil. Vinyl flooring also is found in many homes.

You know we could go on, right? PVC pipe for plumbing and other components that make your house a home. Did you know a three bedroom house will contain something like 41,000 nails – manufactured with machines that run on energy.

The point is made: The house where you lay your head down at night, the house that hosts family gatherings, the house that is your retreat from the world each day – energy. Your home is your castle, but without oil and natural gas you’re probably talking about a sod hut.