When approximately 4,700 delegates and alternates gather in Cleveland next week for the Republican National Convention, energy will play a major role – powering the Quicken Loans Arena, transporting delegates and support staff to and from “The Q,” running television broadcast equipment, cooking food, supporting high-tech communications and much more. 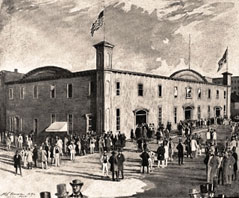 Think about energy’s role this way: Without modern energy supplied by oil and natural gas, the event would bear a strong resemblance to the GOP’s 1860 convention, when Abraham Lincoln was nominated at the Wigwam in Chicago.

Good news for Cleveland convention-goers, assembling in the heart and heat of the summer: “The Q” will be cool and comfortable, well-lit, with sophisticated amplification so every person in the arena – as well as a global television and internet audience – can hear every word from the stage. All powered by energy.

Now’s an excellent time to point out that America’s energy revolution has been very good to Ohio. Natural gas has become the state’s second largest energy source, and more of that energy is being produced in Ohio with natural gas production increasing dramatically in the past few years. Virtually all of that production is from the Utica shale play, developed with safe fracking. Increased use of natural gas has helped lower the state’s carbon emissions from the electric power sector 25.6 percent. OK, some interesting tidbits about the GOP convention:

So enjoy the convention next week – as well as the Democrats’ confab the week after next. Check out a new video that sets the stage for Cleveland: