The Science of Emissions Progress

A couple of charts and a great-news story for the United States in terms of its carbon dioxide emissions.

First, the Obama administration tells us that CO2 emissions from energy use during the first six months of the year are at their lowest level in 25 years: Now, if that’s the “what,” let’s look at the “why,” illustrated in the chart below (EIA data): 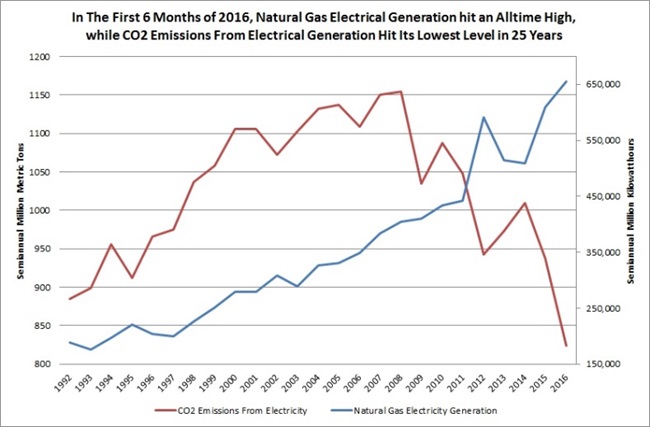 The red line is plummeting CO2 emissions from electrical generation – following the same arc as in the administration’s chart. The blue line here is increasing use of natural gas for electricity generation, thanks to abundant and affordable supplies made possible by hydraulic fracturing (fracking). Check it out: Beginning in 2014 the two lines basically are running away from each other, illustrating natural gas’ role in reducing emissions. This should be of particular note to those who are seeking to block the safe production and distribution of natural gas – efforts antithetical to effective climate action.