Oil and natural gas companies are committed to the communities where they operate – where their employees work, live and raise their families. This commitment is seen in company investments that help create thriving, successful communities, including investments in local education and other initiatives that strengthen the fabric of community life.

Take Encana, for example. In 2015 the company distributed more than $2.46 million to 1,112 charities across North America by matching employee giving dollar for dollar, up to $10,000 per worker, to the charity of the employee’s choosing.

The donations were above those Encana made as part of its regular commitment to communities, such as its 2015 sponsorship of about 800 backpacks filled with food and assistance information for families in San Juan County, N.M., under a program offered by a local anti-poverty organization.

Encana’s not alone in community engagement. The oil and gas industry long has partnered with communities by providing quality jobs and by supporting local and regional economic growth. But the benefits of having an energy company in the community often stretch further, with investments in education, athletic programs, public safety and more.

For example, Chevron Corporation has invested $20 million in the Appalachia Partnership Initiative that focuses on improving education in 27 counties across southwestern Pennsylvania, northern West Virginia and eastern Ohio. The initiative seeks to improve the access and quality of STEM education focusing on three areas: increasing participation in K-12 STEM programs, improving science proficiency scores in middle and high school levels and increasing the number of certification programs (2-year and 4-year programs) in the region.

Spectra Energy also invests in education in a variety of ways, from providing hundreds of thousands of dollars in scholarships to holding a job awareness fair. The inaugural Junior Achievement Inspire event brought together 2,900 eighth-grade students in Houston to learn about potential career paths and the high school and college classes they will need to reach their goals.

Energy companies are helping to bring people together and working to strengthen relationships.  Occidental Petroleum is renovating and maintaining public Little League baseball fields in disadvantaged communities across the Houston area. It’s part of the company’s participation in the Houston Astros’ Community Leaders Program.

Marathon Oil Company educates its employees and surrounding communities about important healthcare topics, such as heart disease, stroke and cancer. Its ongoing partnership with the American Heart Association includes providing employees with opportunities to learn life-saving CPR skills and partnering with schools to provide children with an understanding of heart health. Marathon also supports the Susan G. Komen Race For the Cure® through board support, event sponsorship and employee volunteers.

Less than a year after Hurricane Katrina decimated much of New Orleans in 2006, Shell volunteered to become the event sponsor for the New Orleans Jazz & Heritage Festival – the city’s signature cultural event, which was threatened by the hurricane’s damage.  The partnership proved so successful that Shell is now the festival’s main sponsor through 2019. 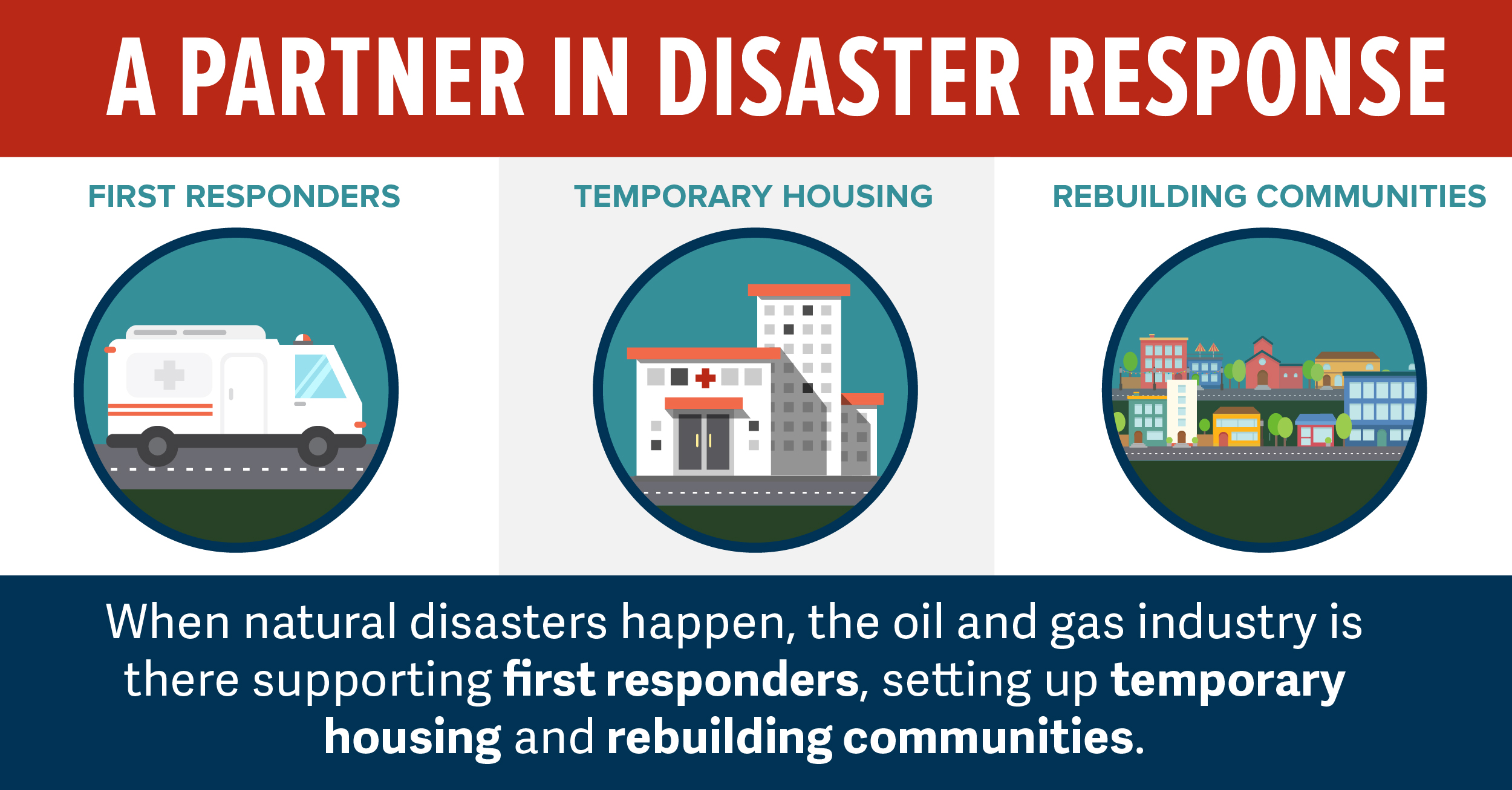 Leadership in Times of Tragedy

Oil and natural gas companies also support their neighbors in times of hardship, often serving as first-responders after a natural disaster, helping displaced families and offering support when it’s time to rebuild communities.

When wildfires burned the community of Fritch, Texas, in 2014, the emergency team from ConocoPhillips’ Borger Refinery was among the first emergency personnel on the scene, aiding in smothering the fires and donating safety equipment and supplies. Then, once the fires were out, the company contributed funds to the United Way for a program offering down payments on new homes to replace those lost in the fires. Additionally, employees at the ConocoPhillips Wood River Refinery in Illinois have worked with local fire departments to produce tornado safety and preparedness materials for community-wide distribution.

These examples represent just some of the work oil and gas companies do each year to help their communities. Our companies recognize that being part of a community means working with neighbors to support the greater good, whether that is helping after a disaster, improving access to health, education and social activities or donating money and time to populations in need.