“Today, the U.S. is both the largest producer of natural gas and the world leader in reducing emissions. When it comes to propelling the U.S. forward with energy in the 21st century, “we no longer have to choose between more energy and a cleaner environment.”

For more than 50 years the Joliet (Ill.) Station coal-fired power plant provided electricity to Chicago and the surrounding region. Yet, after decades of valuable service the plant faced retirement. Instead of closing its doors, the plant was re-born as a natural gas-fired power facility whose three units generate enough electricity to power 1 million homes. With this added benefit – the switch to natural gas reduced the plant’s carbon dioxide emissions by at least 16 million tons a year, a 60 percent decrease from previous levels.

Joliet's conversion to natural gas-fired generation is part of a national trend. Market forces, and regulatory and environmental policies, are driving increased use of this energy source. This shift, that is making our air cleaner and reducing greenhouse gas emissions, is just getting started. According to the EPA’s Annual Energy Outlook 2017, the natural gas will account for 40 percent of electric generation by 2040, overtaking coal as the primary fuel source.

The Joliet Station was one of four plants operated by NRG Energy that recently converted to natural gas. Joliet, along with plants in Louisiana and Pennsylvania, can collectively generate more than 2,780 megawatts – enough to power more than 2 million homes. Switching to natural gas is expected to reduce their combined carbon footprint by more than 80 percent.

Increased use of clean natural gas has helped reduce CO2 emissions from power generation to their lowest levels in nearly 30 years. This fuel shift was responsible for more than 63 percent of the electric power sector’s CO2 emissions reductions between 2005 and 2016. 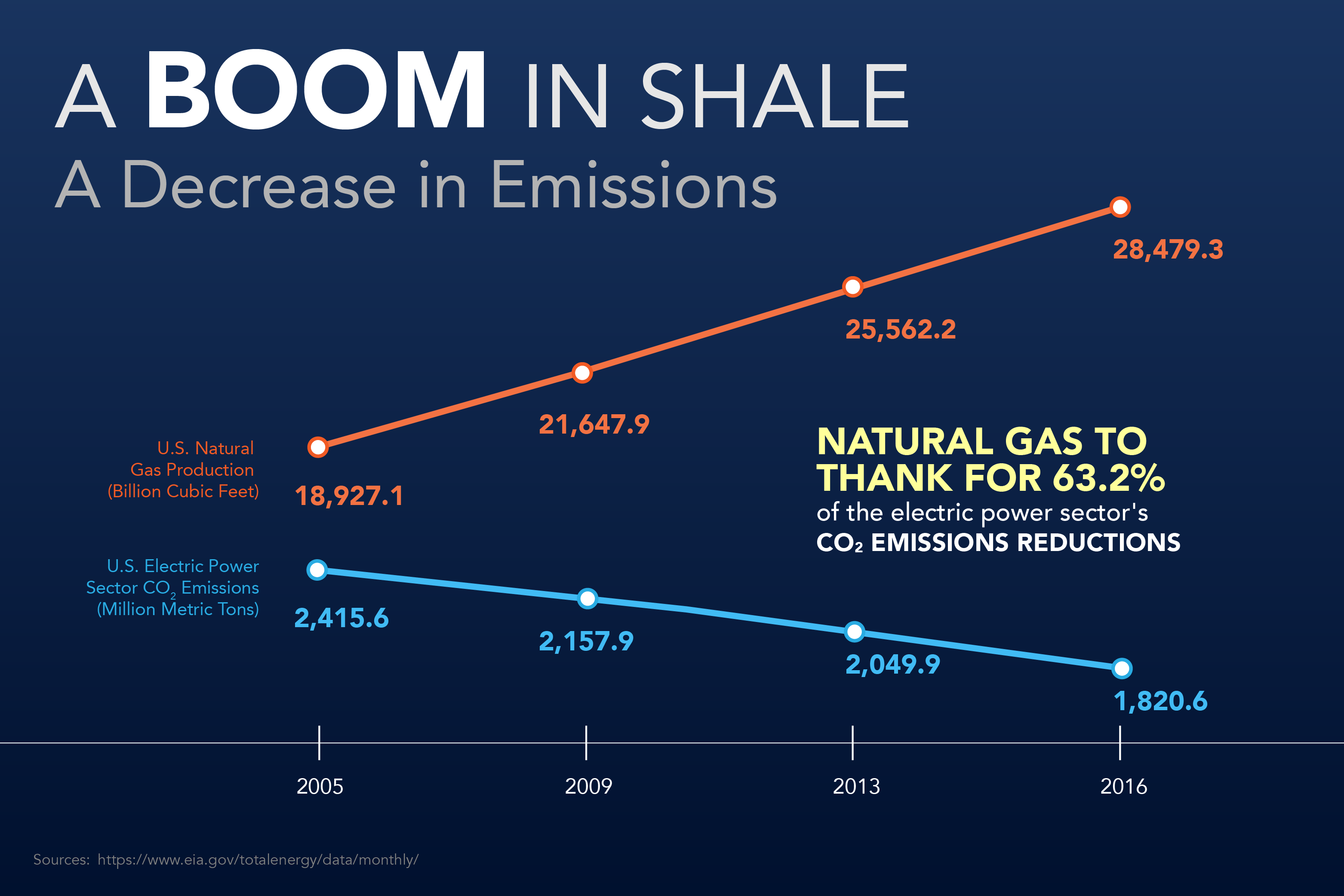 Despite concerns that greater natural gas development would lead to worse air quality, the exact opposite has happened. A reduction in ozone precursor emissions, due in part to greater natural gas use, has contributed to a drop in ozone concentrations nationally by 17 percent since 2000.

According to EPA, methane emissions from natural gas systems has decreased by 16 percent between 1990 and 2015 – even as natural gas output surged. This drop reflects industry’s commitment to protect the environment. For example, last month ExxonMobil announced a program that enhances current efforts to reduce methane emissions from its production and midstream facilities across the U.S.

Thanks to the shale energy renaissance, the U.S. has become the world’s largest natural gas and oil producer. The surge in U.S. natural gas production, which is up 50 percent between 2005 and 2016, has brought great reliability to cleaner power generation. By winning the marketplace, this plentiful and affordable resource has helped make our air cleaner and lower our energy costs.

According to the U.S. Energy Information Administration (EIA), Americans’ cost of living has been reduced due in part to declining energy prices, including natural gas and oil. One study found that cost savings tied to natural gas from shale put an extra $1,337 back in the pocket of the average U.S. family in 2015.  And lower costs are also benefitting the manufacturing sector. In fact, electricity costs for manufacturers are now 30-50 percent lower than those of foreign competitors.

American consumers are spending less on electricity than they have in years. According to analysis from Bloomberg New Energy Finance, Americans spent less than 4 percent of their average annual household income on energy in 2016. That’s the lowest amount ever recorded. Thanks partly to affordable, abundant natural gas, consumers paid 3.9 percent less per kilowatt-hour for electricity than they did a decade ago. Many of the nation’s coal-fired power plants built prior to 1980 are nearing retirement. Converting these plants, and constructing new plants, that use natural gas for generation benefit our environment and our health, while providing an economic boost that reaches all 50 states.

In fact, direct, indirect and induced activities and jobs from natural gas added $551 billion throughout the economy in 2015 and has the potential to increase to more than $1 trillion in 2040.

An example of this economic growth can be found in the Buckeye state of Ohio. Home of the Utica shale, nearly a dozen natural gas power plants are being built or are in the planning stages. These new plants will generate for American homes, industrial and commercial operations, and are expected to provide more than $6 billion in direct investment as well as more than 4,000 jobs.

When it comes to the role of the natural gas industry in our economy, its importance cannot be overstated. Through its complex value chain, the benefits of natural gas in serving customers, supporting job growth and boosting the economy are felt nationwide.