The secretary kicked off natural gas day at the CERAWeek conference with a robust affirmation of the benefits of the American energy renaissance before a room filled with people largely responsible for bringing it about. More on Perry’s appearance and other highlights below.

That’s what Perry calls the present era – based, he said, on recognizing that the United States can indeed grow its economy and produce more energy while making important environmental progress – such as carbon dioxide emissions from electricity generation being down 25 percent since 2005. Perry said energy technology and innovation is largely responsible for this decoupling of growth and increased emissions.

Secretary Perry joined his counterparts from Canada (James Gordon Carr) and Mexico (Pedro Joaquin Coldwell) for a roundtable. Everyone praised Mexico reforms that are opening up the country’s energy sector to foreign investors. Perry called the reforms among the most significant developments ever. (Below, L-R: IHS Markit’s Carlos Pascual, Mexico’s Coldwell, Canada’s Carr and Perry.)

Perry and Carr noted that close allies can have difficult moments. Perry:

“Competition is an uncomfortable thing, and relationships are uncomfortable from time to time. … We work our way through those. As we develop NAFTA, if we renegotiate NAFTA, there are going to be some uncomfortable things. … We are so much stronger together than we are divided. … The energy industry can help create a North American energy strategy that is powerful around the world.”

Infrastructure in and from the Permian Basin will surely be playing catch-up, experts said. That’s mostly a credit to the surging natural gas and oil production coming from the play that stretches across southwest Texas and into New Mexico – which is taking its turn as the country’s hottest producing area. Apache’s Brian Freed (left in the picture below with CME’s Peter Keavey):

“We have to build a trust … As engineers, we all love speaking about the achievements in deepwater and subsurface … skills and our ability to drill sideways, but the customers really don’t care how clever we are. Instead, we have to remind them that we enable modern life, that we bring together family and friends and that we improve their living standards. … If we don’t do it, nobody’s going to do it for us.”

On a natural gas infrastructure panel, David Holt of the Consumer Energy Alliance said families and small businesses have been underrepresented in the discussion of building more pipelines and other infrastructure and that more energy solutions “that matter” for those groups need to be found:

“While solar and wind are ascendant, they’re still a very, very small part of our electricity portfolio. Right now the only solution, the only viable solution for families around the country is natural gas to meet our electricity needs. … But unless we build the energy delivery mechanisms to bring that natural gas to market, we are by definition risking increasing prices for the very people we’re trying to protect.” 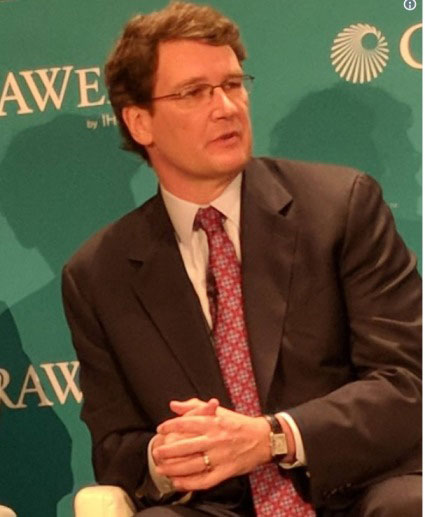 Holt brought up the best case study: New England this past December and January, where consumers by CEA’s estimate paid as much as $2 billion more for electricity than they otherwise would have had needed natural gas pipelines been completed. Holt:

“There was an intentional … repeated political decision by elected officials in the New England states over the last number of years to say no to nukes, no to coal and no to pipelines. So, for about a 30- to 40-day period when we had historic cold weather, we saw absolutely astronomical electricity and natural gas prices. The consumers … had nowhere else to turn.”